New trails and a new plant 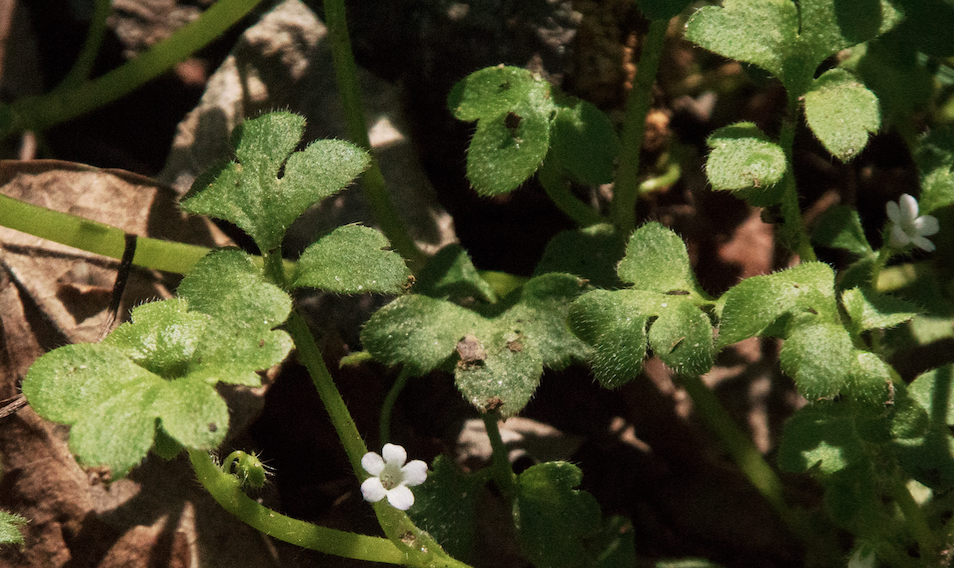 Several weeks ago, friends forced me out of my trail walking comfort zone and insisted that I try two new areas. I wasn’t happy about it at the time, but they were right.

The first area was Powhatan State Park. My immediate reaction was totally negative. Much of the park seemed to be nothing but red clay and old farm fields. There were lots of invasive species and many of the usual plants that you’d expect to find in disturbed areas. I wasn’t impressed and expressed my disappointment to a park employee who suggested that I try a trail that wanders through a low, woodland area and then ends at the James River.

And so I headed back to the park for what I thought would be another waste of time. Oh, was I wrong. I found huge patches of Virginia bluebells blooming on the banks of the James River, lots of yellow corydalis, spring beauties everywhere, may apples galore and a plant that I’d never seen before.

It wasn’t showy, just a low, sprawling plant with fleshy leaves and tiny white flowers. Needless to say, I researched it as soon as I got home. I also sent photos to several friends. No luck anywhere.

Several days later, my puppy’s trainer suggested that we meet at Pony Pastures near the Huguenot Bridge in Richmond.

She wanted to show me how well Navi was doing interacting with both strange people and dogs. I didn’t take a camera because I knew I would be busy with Navi, and I really didn’t expect to find any interesting plants there.

First off, I learned two things about Navi. She’s going to make a great trail companion, and she’s afraid of women carrying large purses shaped like chickens. Seriously, that purse was rather amazing.

And then the plants … Lots of Virginia bluebells, bloodroot, spring beauties, some Solomon’s seal, and, yes, the same plant with the tiny white blooms that I’d seen in Powhatan.

I posted a photo of the mystery plant on my Facebook community page, Virginia Wildflowers, hoping that someone would identify the plant.

I didn’t have any luck for the first 24 hours and then I got a message from a friend whose neighbor just happens to be the co-author of the Flora of Virginia.

And, yes, he knew what the mystery plant was.

My mystery plant was small-flower baby blue eyes (Nemophila aphylla). It’s a native annual and member of the borage family that is found in rich, well-drained flood plains and rich, moist woods in the Piedmont and Coastal Plain.

The genus name Nemophila explains where this plant is usually found: Nemor, meaning woodland, and philo, meaning loving, as in loving woodlands.

Small-flower baby blue eyes is a facultative wetland plant, meaning it’s usually found in wetlands, but occasionally in other areas as well. This plant has fleshy stems, alternate leaves that are divided or deeply lobed and small white to pale blue flowers that are about .2 inches wide. It generally blooms in March and April.

It grows 12-16 inches high and has weak stems that often sprawl. The seeds are quite tough; they’re capable of remaining viable in the soil for several years.

Small-flower blue eyes isn’t particularly common in Virginia, but it’s not endangered. Unfortunately, it’s threatened in Kentucky. I was lucky to find it, especially in two separate locations.

When dealing with Mother Nature’s garden, it’s always important to remember that surprises abound. Patience is a good thing, and good friends are even more important.

Be sure to check out the trails or even the back roads this week. You just never know what you might find. Happy hunting.