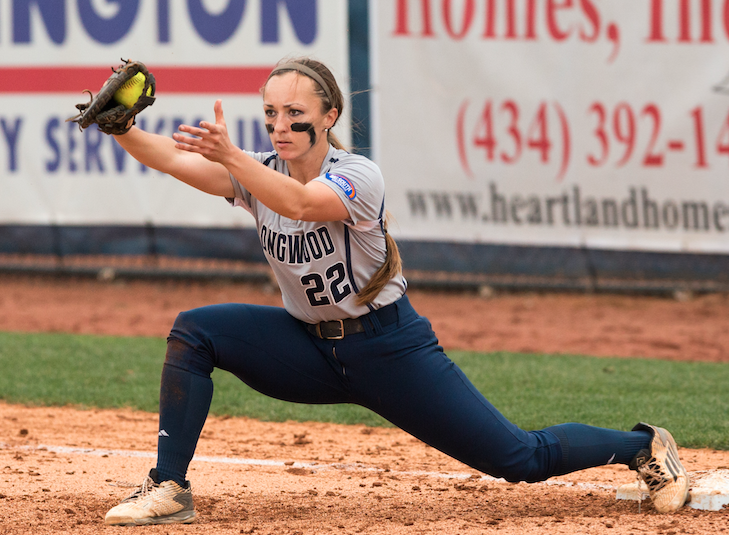 A leg injury she suffered in the second round of the Big South Conference tournament has meant she has likely seen her last time on the field, but she has continued to be an important force of encouragement and support to the team in the dugout.

“I considered it my job to be the team cheerleader this past weekend,” she said.

And after getting to see her teammates earn another ring, she said, “It was awesome. I definitely felt like I contributed, as well, with keeping the energy up in the dugout.”

Looking back on her college softball career, Barbour said she would describe it “as a successful one, definitely. Winning three championships, two regular season titles — not many people get to do that. And I’ll definitely remember Coach (Kathy) Riley. She definitely helped me be the person I am today.”

She said Riley helped her develop mental toughness, pushing her in regard to conditioning and weight training and then helping her develop and discover how she could be successful on the field.

Barbour was a first baseman for the varsity softball team all four years at Amelia County, and she also played for a travel ball team called the Virginia Lady Titans from ages 10 to 18 with Lancer teammate Carly Adams.

Barbour’s introduction to college-level softball at Longwood was a trial by fire, though, as Riley noted that it is for everyone.

“It’s not every day that you get somebody that you can count on,” Riley said, referring to Barbour.

Though recruited as an outfielder, Barbour was moved to first base early on. She had a breakout season as a sophomore, batting .304 and scoring 27 runs to go along with 11 RBIs.

She has seen improvement in different ways since then, but nothing overall has compared to what she has done this season.

“This year, I just told myself, ‘Jamie, just go out there, have fun,’” she said. “‘This is the last year you’ll be able to play at the college level. Just no matter what happens, strike out three times, have a smile on your face.’”

Riley said, “The level of focus that she had this year was just way, way different than it was before. So, I think she was just much stronger, and you could just tell, in her face, in her disposition, in everything that she did she was just better.”