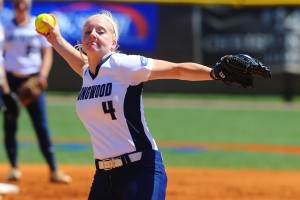 The Lancers qualified for the NCAA Tournament for a second straight season and will learn their regional seeding and destination when the bracket is announced at 10 p.m. Sunday on ESPNU.
After a 5-2 loss to fifth-seeded Campbell in the Big South tourney’s second round, Longwood won four games in two days to repeat as tournament champs. The Lancers outscored their opponents 29-4 during the four-game stretch.
The top-seeded Lancers rained 14 hits — including three home runs — down upon the Fighting Camels on Saturday to trigger a run-rule victory.
Sophomore Glenn Walters hit a two-RBI home run in the second inning and then added a solo homer in the fourth, which sophomore Kelsey Sweeney immediately followed up with a solo shot of her own.
Longwood piled up six runs in the third inning and produced two apiece in the second and fourth.
Six Longwood players finished with two hits, including senior Emily Murphy, redshirt freshman Karleigh Donovan, junior Justina Augustine, freshman Jessica Smith, Sweeney and Walters.
Freshman pitcher Sydney Gay improved her record in the circle this season to 18-6, allowing only one hit, one walk and throwing two strikeouts.