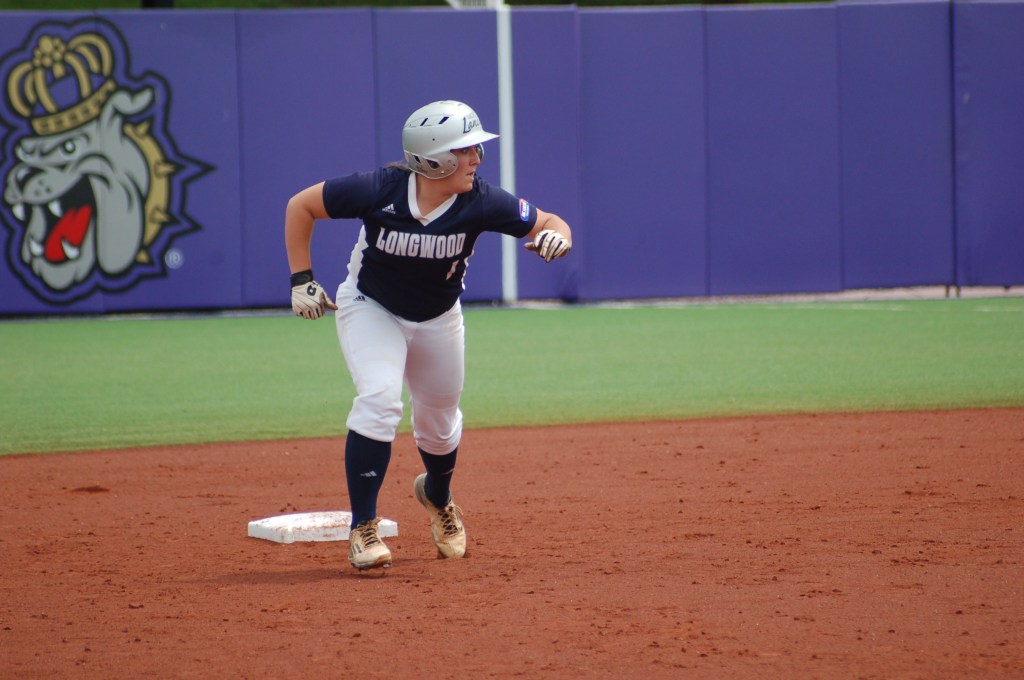 Longwood University freshman Kaylynn Batten looks to advance to third against the University of North Carolina in Friday’s NCAA Harrisonburg Regional game. Batten scored twice, including hitting a two-run homer, but the Tar Heels rallied for a 6-4 win. The Lancers play Princeton in an elimination game on Saturday at 4:30 p.m. (Photo by Titus Mohler)

After three innings on Friday, it looked like Longwood University’s softball team was destined to claim its second NCAA Tournament win in the school’s Division I era, but the University of North Carolina turned things around late.

Scoring four runs in the bottom of the fifth to tie the game, the Tar Heels hit a walk-off home run in the seventh to defeat the Lancers 6-4 in the NCAA Harrisonburg Regional.

Longwood (38-19), the three seed in this regional, will return to the field Saturday at 4:30 p.m. in an elimination game, playing regional four-seed Princeton (23-27), which fell 7-0 on Friday to host and national seventh seed James Madison (47-4).

Lancers coach Kathy Riley described her team’s contest against the Tar Heels (32-23) as a good, solid and competitive game, but she wished her team could have duplicated something about UNC’s performance.

“Carolina did a great job of swinging the bat, got themselves back in the game, and that’s something that we probably need to do a little bit better … swing a little more often early in the count,” she said.

The game was scoreless after the first inning, but in the top of the second, Longwood freshman Kaylynn Batten got on base due to a fielding error and later scored when sophomore Kelsey Sweeney hit an RBI single.

The Lancers played error-free defense, while the Tar Heels finished with three errors.

In the top of the third, Longwood sophomore Krista Kelly doubled down the left field line. Senior Carly Adams hit a sacrifice bunt to move Kelly to third, but then Adams was able to reach first and Kelly was able to score due to a throwing error.

“It was a really good feeling to put a couple more runs up on the board for us,” Batten said.

Riley said that at this point, her own mindset was “just to stay really calm in our approach because we understand that … next inning that you go out there you have to keep them to zero.”

Freshman pitcher Sydney Gay and the Lancers defense kept the Tar Heels scoreless in the fourth inning, but UNC was able to tie the game in the fifth.

There were a couple of walks, and “they hit three or four singles through the hole and just were able to find good places,” Riley said.

She noted it was not a situation that made her lose confidence in Gay.

“I thought her control was still sharp,” Riley said. “She was getting ahead of hitters, and up until that point, they only had two or three hits, so there was really no reason to lose any confidence in where she was at that point.”

Gay (18-7) said she felt good about what she was able to do in the circle.

“I hit my spots,” she said. “UNC’s just a strong hitting team. They all hit it in the hole, like coach said, and I felt pretty good out there. I knew my team had my back, so they’re just a good team to play.”

The Tar Heels finished with nine hits, while the Lancers produced four.

As Longwood heads into its game against Princeton, Riley said she is looking for more good pitching and defense from her team, as well as more swings earlier in the count on offense.

“I felt like we got a lot of 0-1, 0-2 counts today, and you had to be a little more defensive or swing at some peripheral pitches, and it would be nice if we’re swinging at some of those early strikes,” she said.