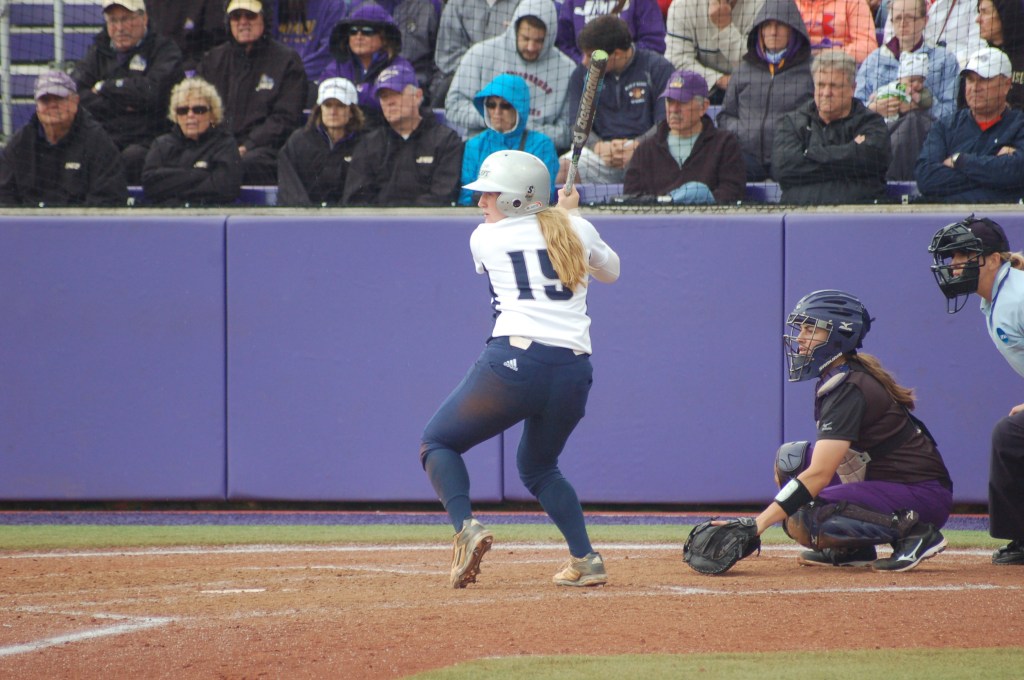 4:08 p.m. – The Lancers finished the season 40-20, their third 40-win season in Kathy Riley’s 19 years as their head coach. All three of those 40-win seasons have come within the last four years. This season, the Lancers also tripled their number of NCAA Division I Tournament wins , adding two to their first win that they earned last season against Virginia Tech. Please check back at www.FarmvilleHerald.com this evening for the game story.

4:01 p.m. – Augustine hits a ground ball that looked like it would be easily fielded, but spun away, allowing Augustine to reach first. Krista Kelly is at bat. She hits right to the pitcher, but Smith and Augustine move to third and second, respectively. Score: JMU 5, Longwood 1

3:59 p.m. – Smith is still battling at the plate, as the Lancers have only one out this inning. Their season comes down to this. She hit a high bouncing ball that bounces off the knee of the JMU infielder as she attempted to field it, allowing Smith to reach first. Augustine is at the plate now. Score: JMU 5, Longwood 1

3:57 p.m. – Longwood Coach Kathy Riley has just been ejected from the game.

3:54 p.m. – Justina Augustine made a remarkable diving catch in the outfield to get the Lancers back on offense. Longwood has one out, though, with Jessica Smith at bat. Score: JMU 5, Longwood 1

3:53 p.m. – The tide has turned definitively in favor of the Dukes as they took a 5-1 lead in the top of the seventh. The bases became loaded after a walk, a hit and hit by pitch, and then JMU was able to generate more hits to score runs. The developments pleased much of the 1,691 spectators on hand here, but the game isn’t over yet.

3:30 p.m. – Gay strikes out a batter, and now McCarthy enters the circle in relief. Gay pitched 5.2 innings, allowing only two runs and four hits. A great catch by Krista Kelly past the left field line moves us to the bottom of the sixth inning. The Lancers offense needs to get to work and rediscover some of its success it experienced in the third inning. Score: JMU 2, Longwood 1

3:28 p.m. – The Dukes have two errors, while Longwood has none, but JMU also has four hits now, compared to the Lancers’ two. Elizabeth McCarthy has been warming up in the bullpen. Gay walks a batter to give JMU a runner at first with one out. Score: JMU 2, Longwood 1

3:23 p.m. – Sydney Gay is in the circle as the top of the sixth inning gets underway. The Dukes have just hit another home run, this one bouncing off the top of the right field fence before going out to give them their first lead of the ballgame. Score: JMU 2, Longwood 1

3:14 p.m. – There was no score in the fourth inning, but the Dukes tied things up in the top of the fifth with a home run to left field. Nevertheless, the Lancers defense was unfazed. Emily Murphy laid out to bring in a hit near the left field line, and a catch beyond the right field line brings us to the bottom of the fifth. Score: 1-1

2:54 p.m. – The Lancers enter the fourth inning with a 1-0 lead on host and national seventh seed James Madison. Their defense will need to continue what it’s been able to do thus far.

2:50 p.m. – Augustine got tagged out at second, but Krista Kelly is walked to restore Longwood’s tally of runners of first and third. But Good recovers to strike out Carly Adams. To avoid senior Emily Murphy, Good walks her, loading the bases. Murphy is Longwood’s best hitter with a .364 batting average. Score: 0-0

2:44 p.m. – A surprising throwing error by JMU allows Jessica Smith to not only get on base, but reach second. Then, a JMU defender doesn’t hold on to the ball when trying to tag junior Justina Augustine on her way to first, giving the Lancers runners on first and third with no outs.

2:41 p.m. – Longwood’s defense is doing quite well. Sophomore left fielder Krista Kelly and freshman third baseman Jessica Smith came up with nice catches in foul territory, and then Sydney Gay collected a ground ball for the third out at first. Score: 0-0

2:38 p.m. – Redshirt freshman Karleigh Donovan is struck out by Megan Good, and sophomore Kelsey Sweeney has a hit between first and second caught by the Dukes’ second baseman. The Dukes are known for their excellent pitching, and Megan Good has been representing them well so far today. She strikes out sophomore Glenn Walters to end the second inning. Score: 0-0

2:31 p.m. – The Dukes are not lacking for support as the packed infield and outfield stands are sprinkled with purple. People line the railing at the top of the stands where it is standing room only, not only here in the softball park but also along the top of the stands in the adjacent baseball field. Behind the outfield fence on the embankment next to the road, are fans standing on the sidewalk and sitting in lawn chairs. Despite the home field advantage for JMU, Longwood has a loyal gathering of fans here, concentrated next to its dugout. Chants of “Let’s go, Longwood!” can be heard, supporting the Lancers as they strive for a third out and then get it, moving the game to the bottom of the second inning. Score: 0-0

2:25 p.m. – JMU sophomore pitcher Megan Good ends the first inning with a strikeout of Kaylynn Batten. Gay also ended the top of the first by retiring a Dukes batter. Score: 0-0

2:22 p.m. – James Madison has been efficient on defense, as one would expect of the national seventh seed. Longwood’s Emily Murphy gets a two-out single, though, to give her team some life in the bottom of the first. Score: 0-0

2:18 p.m. – The Dukes got a hit in their first at-bat, but then freshman pitcher Sydney Gay and the Longwood defense put down the clamps and moved this game to the bottom of the first inning. It’s interesting that the Lancers are being treated as the home team. Score: Longwood 0, JMU 0

2:13 p.m. – The Lancers (40-19) won both of their elimination games yesterday to put themselves in the position today to win an NCAA Regional Championship! Because they lost to the University of North Carolina in their first game of the regional, the Lancers are fighting their way out of the losers’ bracket and must beat the Dukes (48-4) twice today to claim the title. Due its success yesterday, Longwood has been gaining national attention — http://espn.go.com/espnw/sports/article/15637630/unveiling-10-biggest-moments-ncaa-softball-tournament-saturday-regionals

2:07 p.m. – The Longwood University softball team is about to take on host and national seventh seed James Madison University in the NCAA Harrisonburg Regional. The game was delayed slightly due to the rain that has been an intermittent presence here in Harrisonburg all weekend. The first pitch is scheduled for 2:11 p.m.