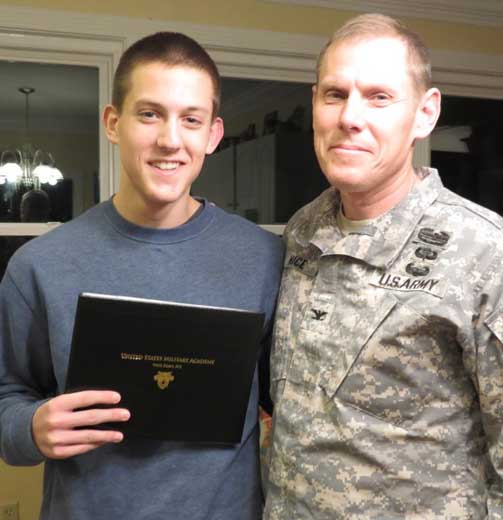 Fuqua senior David Hice and his father, Col. Jeffrey Hice, pose together after David received his acceptance letter to the U.S. Military Academy at West Point.

Fuqua School senior David Hice has been accepted to the U.S. Military Academy at West Point — fulfilling a dream since seventh grade.

“My dream job is to serve as an infantry platoon leader in the United States Army,” Hice said in a school press release.

Hice learned of his acceptance into USMA at West Point on Jan. 26. “I’m really excited to see where it takes me,” he said. “I think it’s a great opportunity.”

He said the dream to go to West Point came to him in the seventh grade when his father, Jeffrey, was deployed. “My dad has been in the military for 30 years,” Hice said.

Fuqua Middle and Upper School Dean Susan Carden said she was one of Hice’s classroom teachers when he originally set his goal years ago.

According to information from West Point admissions, “being accepted for admission to the United States Military Academy (USMA) at West Point is an exceptional honor reserved for our nation’s most promising students.”

Admission into the USMA is not strictly based on grade performance, however, the institution seeks leaders who are also physically fit and possess outstanding character. “Those who are selected to attend USMA receive a college education that is unparalleled in the world with tuition, room and board and expenses fully paid.”

“David exemplifies many of the core values we hope to instill in our future leaders,” said Head of School John Melton. “When I think deeply about my interactions with David and the manner in which he conducts himself within the student body, his level of humility stands out.”

Melton said Hice “leads by example, leans into challenge and shows a tenacity of spirit that will serve him well at West Point. I wish him all the best and know that he will serve his country for all the right reasons.”

Hice was is a recipient of the Taylor Social Studies Award.

“It’s been very exciting to watch his development at Fuqua School,” Carden said. “To watch the development of his character has been so impressive.”

Hice is president of his class and a dedicated member of numerous clubs at Fuqua. His extracurricular activities include service as the school’s student council association vice president, Reader’s Club vice president, Battle of the Brains captain, Model General Assembly, co-president of the Model UN, varsity cross country captain, varsity soccer and Youth for Christ, according to the school.

Carden said Hice will leave a large void at Fuqua when he leaves.

Hice is set to leave for basic training on June 27. USMA at West Point is located in West Point, N.Y.

David Hice is the son of Col. Jeffrey and Christina Hice, of Farmville.