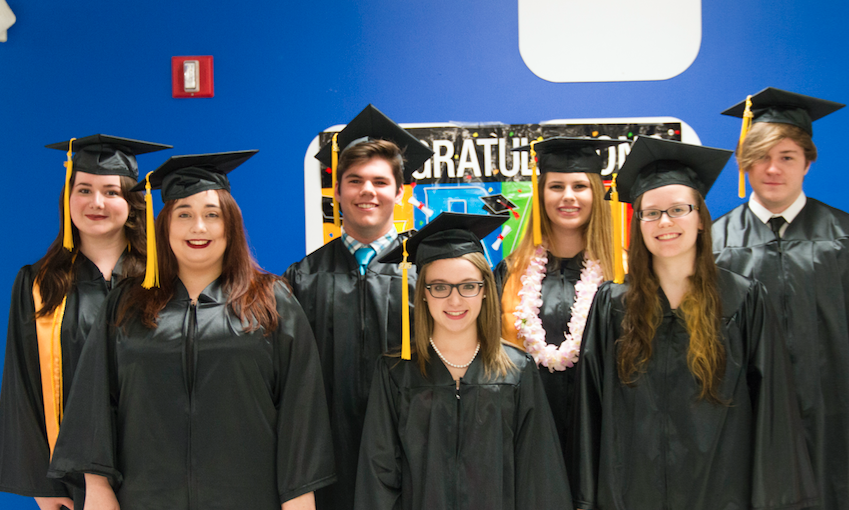 Family and friends celebrated the graduation of this year’s New Life Schools seniors on May 20. The event marks the 11th and final graduation at New Life Schools, located in southern Cumberland County. There were eight seniors in the class of 2016, and seven in attendance Friday night.

Though the school will be closing its doors on June 30, the celebration was one of joy and optimism.

Dr. Betty Weaver, school administrator, said, “I’m so excited for these kids. The sadness hasn’t hit yet. I just feel, really, that we have planted seeds all these years. I can’t be but so sad because we have invested in these children, who are invested in others, and that’s what it’s all about. Even though the building may close its doors, the school will keep living on.” 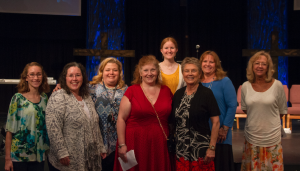 CARSON REEHER| HERALD
Some of the teachers who worked with the graduates during their time at New Life Schools are, from left, Samantha Day, Joan Osborne, Gwen Rigney, Lori Paulsen, Kelly Leslie, Dr. Betty Weaver, Vicki Fulcher, and Jeffree Hudson.

School administration decided to close the doors to the schools after being unable to raise the needed funds and enrollment to continue to operate, according to Weaver. The announcement to close the school was made weeks ago.

According to Weaver, in the past 11 years, 94 percent of New Life graduates have attended college after graduation.

High School Principal Vickie Fulcher said, “It was really bitter sweet tonight, because four of the students in this group actually started here in preschool, so they’ve literally been here 14 years and I’ve watched them grow from 4 years old, right on through.”

Sarah Elizabeth Harman, salutatorian, said, “For most of us today will be the only monumental day until college graduation, or perhaps marriage.”

Harman, who attended New Life Schools since eighth grade, will be moving on to Monmouth College in New Jersey to attend nursing school.

During the ceremony, scholarships were given to students. Joan Fischer-Osborne presented two E.B. Fischer Scholarships, valued at $310, to Harman and Alice McKenna O’Brien, valedictorian.

Osborne said, “The ladies that qualify for this scholarship are the ones that know what they’re striving for, but just need a little help.”

Kaitlin Joy Mickels and O’Brien each received an athletic scholarship from New Life Schools for their participation on the volleyball team.

Following the presentation of scholarships, O’Brien spoke, saying “It’s such a privilege to have been here.” She stated, “God loves the little moments,” and encouraged her fellow classmates to go out in the world, overcome, succeed and not be afraid to fail.

This year’s class of 2016 received praise from those in attendance.

“They have great potential and I just know that they are going to do whatever they set their mind to. I’ve devoted my life to these kids and they have made me so happy,” said Weaver.

“What’s so great is they never got to the place where they didn’t want to learn. They’ve always enjoyed learning and they’ve had fun … They’ve kept us entertained. They’re a really good group,” said Fulcher.

“I do feel like we are sending out a great bunch and in addition to all the students that we’ve touched and I think we’ve graduated some real world-changers.”

All of the graduates have plans to attend college in the fall, with career goals ranging from nursing school to the culinary arts.