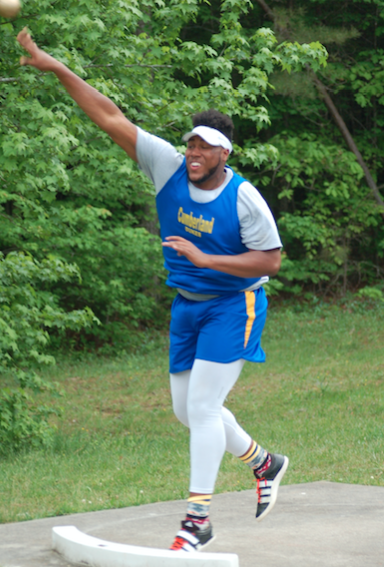 Cumberland High School’s track teams had the best showing at the regional level among area schools as the Lady Dukes finished third out of 20 teams and the Dukes tied for fifth out of 20 teams at the Region 1A East Outdoor Track and Field Championships on Thursday at Sussex Central.

The Lady Dukes had 50 points, while Lancaster won with 60.33, and the Dukes generated 36, while Middlesex won with 72.

“The coaching staff is extremely proud of our teams’ great will to compete,” Cumberland Track and Field Coach Kenneth Jasey said.

He praised Timothy Jackson for capturing the regional title in the shot put and the discus throw.

Jackson had a 48-09 throw in the shot put, and he set a regional record with his 155-09 throw in the discus, a tremendous throw which was over 11 feet farther than his nearest competition.

Jasey also highlighted Ebony Jones for winning the individual title in the 300-meter hurdles. She won with a time of 49.52 seconds, just four tenths of a second off former teammate Annesha Harris’ regional record.

“Great performances from every underclassman, young ladies and young men,” Jasey said. “A ton of student/athletes have advanced to Radford University for (the Virginia High School League) 1A State Championships next week.”

At the Region 2A East Championships on Wednesday in Elkton, Prince Edward County High School’s girls and boys teams were near the middle of the pack but produced a variety of state qualifiers.

Montiera Wynn of the Lady Eagles finished second in the 400-meter dash with a time of 1:01.47.

Buckingham County High School had six girls who had advanced to compete in Wednesday’s Region 2A West Championships at Radford.

The Lady Knights produced seven points and finished in a three-way tie for 17th out of 22 teams.

Winning the girls meet was Giles with 86 points. Among the Buckingham students advancing to states was Jamiyah Gough, who placed sixth in the long jump, and the other girls making up the 4×800-meter relay team, which also took sixth.

The Group 1A/2A Track and Field State Championships will be held Friday and Saturday at Radford University.

Stay with the Herald for updates on the meet.