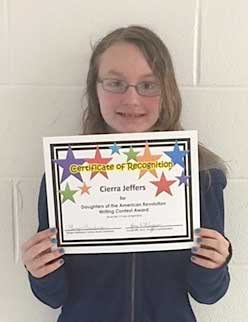 Two students of Cumberland County Public Schools were recognized at the April 11 meeting of Cumberland School Board, for receiving awards from the Daughters of the American Revolution (DAR).

Cierra Jeffers, a student at Cumberland Middle School, was winner of the DAR History Essay contest. This contest was established to encourage young people to think creatively about the nation’s great history and learn about history in a new light. 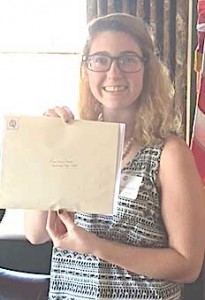 Tina Eubank, a senior at Cumberland High School, received the DAR Good Citizen Award. She also received a monetary award of $50 and a DAR lapel pin.

According to the high school administration, Eubank was selected by 12th-grade teachers for “being an excellent role model for students by being strong academically and treating everyone as equals.” She is currently senior class president. A ceremony sponsored by the Farmville DAR Chapter was held in her honor on March 8 at the Farmville Train Station.