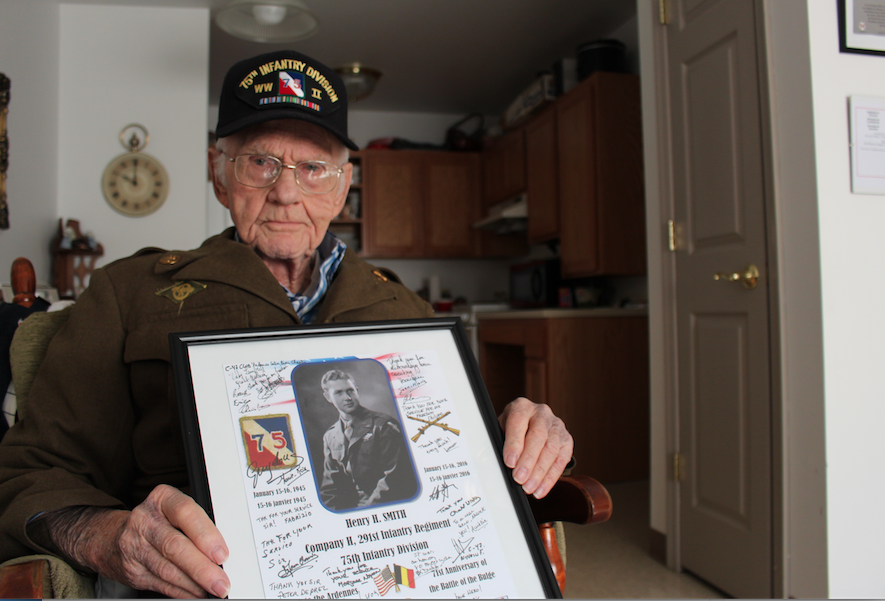 ERIC PETERS Henry Smith, who served in the 75th Infantry Division in World War II, holds a gift he received when he visited Belgium earlier this year. The framed item includes a photo of Smith and thank-you notes from people who today live in towns that he helped liberate in 1945. He is wearing his uniform coat that he wore while in the service.

The stories of two veterans, both 91 years old, have been brought back to life in recent months — decades after their service was completed. Each veteran has been awarded for his dedication to serving the United States.

Senior Pilot Maj. Reese Tucker, a retired member of the Air Force, had been working to receive his command pilot wings since his retirement in 1965. 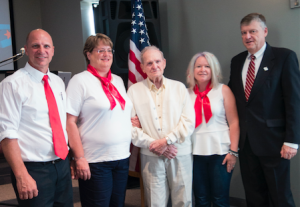 CARSON REEHER | HERALD
Cindy Ott and Kat Short helped contact U.S. Rep. Robert Hurt so that Tucker could receive his wings, despite retiring a short two weeks before he would have been eligible. During the ceremony, led by Pastor Marv Fisher, Mayor David Whitus presented Tucker with his wings. Pictured are, from left, Fisher, Ott, Tucker, Short and Whitus.

Unfortunately, he retired 14 days too early to receive the wings, despite having 4,000 more hours in flight than the required 1,500 hours.

Because of the hard work of caring friends and community members, Tucker now has his wings. Cindy Ott and Kat Short, in particular, helped behind the scenes.

They contacted U.S. Rep. Robert Hurt’s office, and from there it was decided Tucker had more than enough hours.

On Sunday, May 22, during a ceremony at Calvary Chapel, Tucker was surprised when he was told he would be presented with his command wings. Farmville Mayor David Whitus attended the ceremony and presented the wings to Tucker. 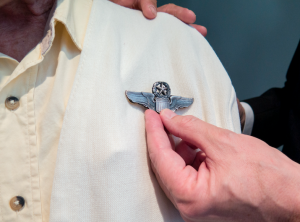 CARSON REEHER | HERALD
Mayor David Whitus holds Maj. Reese Tucker’s Command Pilot Wings at Tucker’s chest. On May 22, Whitus presented Tucker with his wings during a ceremony in tribute to veterans and those who served our nation in the armed forces.

“My words can’t say what my heart is feeling, but my tears can,” Tucker said. He said he was honored and excited have finally received his wings.

“I’ve waited a long time for them,” he said.

“I was honored and privileged to pin Maj. Tucker’s wings on him on behalf of Congressman Robert Hurt,” Whitus said.

The “One Nation Under God” ceremony, hosted by Calvary Chapel, honored veterans in attendance with songs sung by the chapel’s choir. Pastor Marv Fisher helped to lead the ceremony and congratulate Tucker.

Tucker shared stories of his time in Japan in the mid-1950s where he went on secret night missions to test the air in lieu of the dropping of the atomic bomb.

Rain or snow, he and others would fly down to 40,000 feet to get samples of the air. It was very dangerous, he said.

According to Tucker, it’s important to honor veterans because it shows that the nation has respect for what they do.

“Our veterans are heroes,” Whitus said. “The men and women who have fought and died protecting and defending this great nation and our liberties are worthy of our respect and admiration for the sacrifices they have made for our country. Honoring our military should be something every American is proud to do.”

In January, 91-year-old World War II veteran Henry Smith returned to Luxembourg, Germany, after 70 years away, to receive plaques in his honor, attend banquets and receive awards for his service liberating German communities, including Vielsalm, Frand-Halleux and Salmchateau.

Smith was a machine gunner for the 75th division while in the service.

The book describes how Smith’s army divisions contributed to the Battle of the Bulge and of his travels, more recently, in January to Belgium, where he was thanked by the community.

The book focuses on how the 75th Division defended the American Army against German divisions despite having limited training, a lack of food, supplies and winter clothing. Because of their efforts, the German Bulge collapsed and the division earned the name “Bulge Busters.”

He is a former horseshoe champion and enjoys playing cornhole in his yard. Smith enjoys writing, sketching, painting and emailing with friends and family.

Smith keeps a photo of his late wife of 67 years close by as a way of honoring her memory.

“It was nice to be thanked,” Smith said.