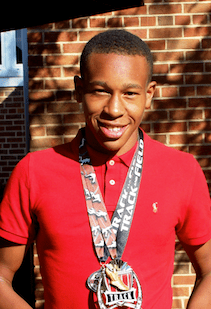 The Prince Edward County High School track teams competed in a meet Saturday that was held at Liberty University. It featured 34 boys teams and 33 girls teams.

Individually Rajai Walton won the award for most valuable field event performer by winning the high jump (6’7”), placing second in the long jump (21’ 3”) and fifth in the triple jump (42”5”).

The 4X100 relay team placed fourth with a time of 44.6 seconds. The members of that relay team are Walton, Brandon Scott, Dennis Dubose and Quantavius Nash. Montiera Wynn placed sixth in the 400-meter run (63.21 seconds).

All of the athletes mentioned above have met the standards to compete in the state track meet in June.

The members of that relay are Dubose, Walton, Arthur Wright and Lionel Bowles.

The Eagles will host Randolph-Henry and Bluestone on Wednesday at 4:30 p.m.