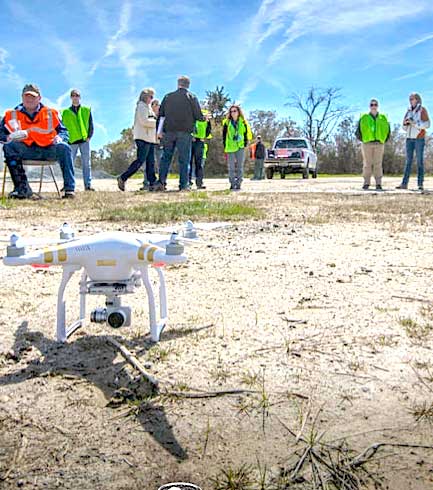 Thirteen students from five Virginia Community Colleges can now add unmanned aircraft systems (UAS) and NASA to their resumes thanks to their work on a sea level rise study for NASA Wallops Flight Facility on Virginia’s Eastern Shore.

The students recently completed four days of fieldwork at NASA Wallops in which they planned and conducted UAS missions, analyzed data and prepared a report for NASA. The fieldwork was completed as part of a new pilot online course, Topics in Service Learning in Geographic Information Systems (GIS), offered by Thomas Nelson Community College in partnership with the Virginia Space Grant Consortium (VSGC) as part of the VSGC’s NASA-funded STEM Takes Flight at Virginia’s Community Colleges project.

In preparation for the fieldwork, students worked under the guidance of faculty mentors Cherie Aukland and David Webb to develop knowledge and skills in GIS, remote sensing, UAS and sea level rise. The goal of the fieldwork was to demonstrate the capability of small UAS to collect imagery and other data about phragmites, an invasive species and shoreline data to help Wallops assess the impact of sea level rise on the facility. The student-gathered data and technical report will support NASA Wallops’ Coastal Resilience Initiative and goals for future similar use of UAS.

“The partnerships were tremendous. Thomas Nelson, VSGC, NASA Wallops, and Sentinel Robotics Solutions (SRS) worked great together to make these ground-breaking missions happen. All of us were thrilled to be part of the first autonomous flight of a UAS in the airspace at NASA Wallops,” VSGC deputy director and project coordinator. “Students demonstrated real strength and ability to complete the goals of the class despite having just met each other and a mission schedule that was adjusted at the last minute due to the weather,” said Webb.

Student participant Matthew Cox said that this “was a great experience getting to work with actual NASA employees.  It was interesting to see the steps and procedures the team had to complete before being able to fly the missions. From the data we collected, we were able to identify the shoreline and phragmites, which was rewarding because that was the ultimate goal.”

A DJI Phantom 3 quad-copter flew an autonomous flight over 52 acres on the north end of the island. This mission collected 211 high-definition, true- color images to create a high resolution map of the area. A manual flight using a DJI Phantom 2 quad-copter equipped with a payload of a Raspberry Pi-controlled near-infrared camera was flown over a smaller area on the south end of the island. Students used GIS to analyze the imagery and data about the shoreline and presence of phragmites. “We were able to prove that these relatively low-cost vehicles and sensors can be used to identify phragmites and the shoreline. Now NASA can fly and collect data-on-demand with small UAS. What a great real-world service learning project for these students,” Aukland said.

Wallops Environmental Scientist Michael Bonsteel stated, “These missions allow us to gather data for the exact regions where we have questions about erosion, accretion and subsidence. Using small UASs for data collection will enhance our ability to gauge the health of our ecosystems and evaluate the success of invasive species management strategies. The use of small UASs results in low-cost, high-value projects, in line with the overall Wallops business model.”