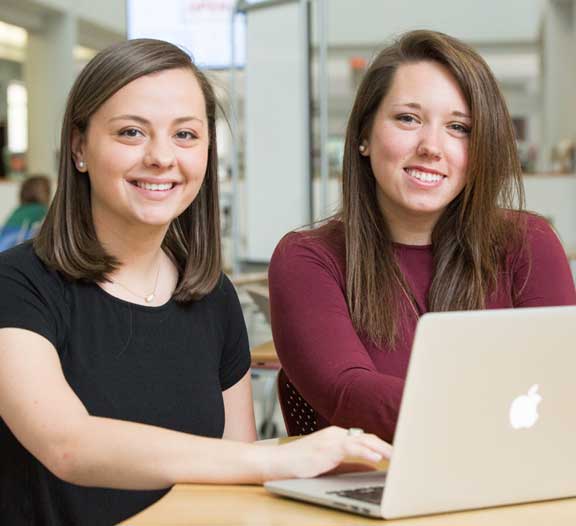 When Megan Johnston’s mother died in 2012, and again with her grandmother’s death this March, social media was a big part of the grieving process.

In checking her Facebook page for responses to her bereavement posts, the Longwood University senior found something interesting. Younger friends generally posted short messages, often simply a “like” and tended to offer advice instead of sympathy. Posts from older friends were apt to be longer, more empathetic and less likely to include advice.

So she wasn’t surprised when a research study by her and another Longwood student found the same generational differences in how social media is used in grief and bereavement.

“The social media platform is replacing the funeral home visitation for many people,” said Johnston.

The study, which will be presented at a conference in Spain later this year, compared the way in which people 18-25 and those older responded to the online bereavement posts of others, as well as the experiences of creating one’s own bereavement post on social media.

Johnston and research partner Molly Scoggin, both senior psychology majors from Richmond, found that younger adults were more likely to offer support by clicking “like” and to offer advice to people who were grieving. They were less likely to post a reply to others’ bereavement posts and to write a post offering sympathy or condolences.

“The responses by younger adults were short and to the point, while responses by older adults tended to be longer and more thought-out, and they gave more condolences,” said Johnston. “Plus, our generation is more into offering advice, often abrupt, along the lines of a step-by-step plan: ‘Let me tell you what to do,’ in other words. Older people’s responses were more like, ‘What can I do to help?’”

Johnston and Scoggin weren’t surprised that younger adults were more likely to have checked to see if others had “liked” their bereavement posts. “Our generation needs that reinforcement, which is all we know. And it’s cheaper than therapy,” said Johnston.

Dr. Chris Bjornsen, professor of psychology, under whom the students did their research as an internship this spring, also wasn’t surprised. “Online social interaction is normal for young people. They’re used to brief and frequent social contact, so a ‘like’ is often good enough for them,” he said. “For older adults, on the other hand, receiving a post was more helpful. They’re looking for a written comment.”

When Johnston’s grandmother died recently, “one of the first things I did was post it on Facebook, with a link to the obituary,” she said. “That’s what people our age do when they lose a loved one. Facebook is a good platform for sharing. I received over 200 ‘likes’ and 58 comments, and they helped me grieve. It was a coping mechanism.”

Johnston’s interest in the topic was prompted by social media’s role in the wake of her mother’s death. “My dad and I posted it on Facebook, and we got just as many Facebook posts as cards in the mail. The magnitude of that response surprised me,” she said.

The study consisted of an online 31-item questionnaire completed by 225 people. Respondents had to be at least 18 (the average age was 35; the oldest was 82) and had to have read or responded to a bereavement post, or to have posted about their own loss of a loved one online.

A poster on the study, “All Things Must Pass Away Online: Bereavement on Social Media,” has been accepted for presentation at the XV biennial conference of the European Association for Research on Adolescence, to be held Sept. 16-19 in La Barossa, Spain.