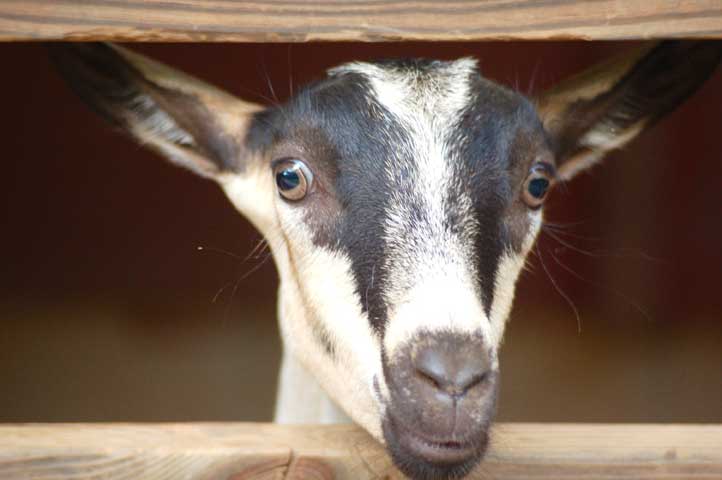 Goats like Claude are never “on the fence” — they’re either under it or over it.

When I came home from work and found a goat in the garage I knew it was trouble.

“What’s Heathcliff doing in the garage?” I asked my spouse.

“Looking for a tool?” he suggested.

The TV in the garage has been tuned into one of those “fix-it” shows. Who knows what tips the goats might have picked up — like how to jimmy the corner of the fence. Every goat knows what a loose fence spells: “e-x-i-t!”

The goat keeper’s creed is simple: the best defense is a good fence. Our pasture fence was pushing (another favorite goat activity) 30 years. We knew it was time to replace it, which we did a short time later.

Before the new fence was installed, however, a goat escape meant a trip to the garage for the fencing pliers. Typically Heathcliff would exit as I entered with something tucked under his collar. This time it was magazine pages.

Gathering up pages of Good Housekeeping along the way, I followed my gallivanting goat back to the barn.

“Are you redecorating or just clipping coupons,” I asked.

“Oh, that!” Heathcliff snorted. “I picked those pages up by mistake — thought it said Goat Housekeeping. But then another story caught my eye.”

Claudine produced a page from under her collar.

“Very funny,” Claude shook his beard and looked down his nose. “But the article makes sense.”

“Dollars and cents, I would hope,” I added.

Heather gave me the look. With a toss of her ears she cleared her throat (no easy feat for a cud-chewer) and began to read, “Recent studies indicate that ads including animals are the most effective.”

“Magazines are better,” Claudine said as she nipped a corner off the page in my hand.

Heather stamped her front hoof to refocus. The toilet paper idea had her on a roll.

“Here’s another idea,” she said.

Holding up a page from Time, she continued, “Federal employees were asked to submit ideas on how to cut the budget. An idea featuring goats won. Instead of hiring humans to clean up around federal buildings they voted to use goats.”

“The goat vote — I’ve heard of that,” I told my cloven-hooved friends. “It’s not without precedent —during World War I, President Woodrow Wilson grazed sheep on the south lawn of the White House, then sold wool to raise money for the Red Cross.”

“The Commander in Sheep!” Heathcliff enthused. “I like it. You can’t pull the wool over anyone’s eyes with a yard full of sheep.”

As usual the goats hit the political nail on the head.

This political season we’ve heard considerable talk about fences. Candidates, however, would be wise to consult with some goats.

The “Commander in Sheep” might take care of the White House lawn — to make it inside,  better vote with the goats.

Marge Swayne is the lifestyles editor of The Farmville Herald. Her email address is marge.swayne@farmvilleherald.com.