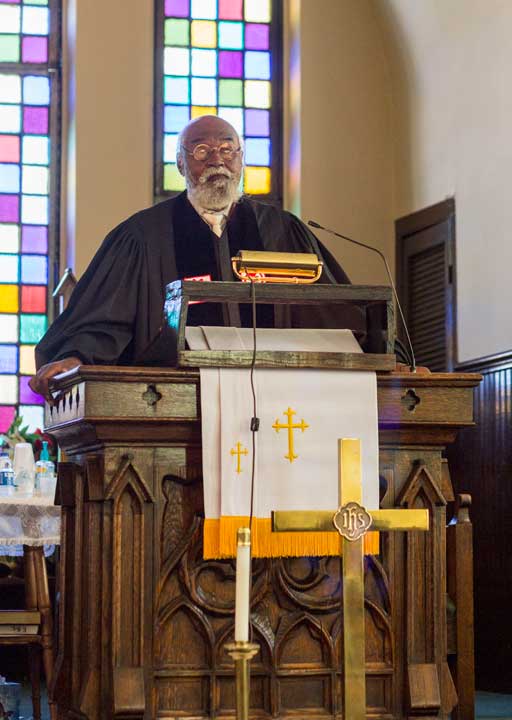 Community members united on Sunday at the First Baptist Church to celebrate the 65-year anniversary of the historic Moton student strike.

The service was hosted by the Moton Museum and First Baptist Church. The Rev. J. Samuel Williams Jr. was one of many guest ministers of the day and the event’s main speaker.

“Look around the country, there’s a whole lot of founding to be done,” Woodley said. “We haven’t finished giving birth to this nation.” He encouraged those in attendance to “lift each other.”

The speakers focused on coming together to appreciate the activism of Johns, Griffin and those who participated in Farmville’s civil rights movement.

Barbara Johns led the 1951 student strike out of the Robert Russa Moton High School in Farmville. The Davis vs. Prince Edward case was filed following the strike in an effort to create equal opportunity for all races in the education system and desegregate schools. The case was included in the Brown vs. Board of Education case, which ruled segregation in education unconstitutional.

According to an event press release, “It was inside the First Baptist Church that Moton students and families formally joined the NAACP legal campaign to end school segregation. These local families ultimately comprised 75 percent of the plaintiffs in the Supreme Court’s landmark 1954 Brown vs. Board of Education.”

“(Barbara Johns) locked arms with Griffin and he locked up with the NAACP, because they were tired of these conditions,” Williams said of the student strike.

Williams, a member of the group of students who participated in the strike on April 23, 1951, has served as pastor of five different churches, the first of which was First Baptist Church, where Griffin mentored him. Williams is now a pastor at Levi Baptist Church.

Williams described his time at Moton High School as being challenging and dark.

“We were trying to our way out of academic darkness,” and Williams said the students wanted to “(find) a way out of stereotypes.”

He said that everyone was created for various purposes in life. “Nobody is superior. We all have our place in time,” Williams said. “Racism is still with us … We have a lot of work to do still. “

Williams emphasized the diverse attendance and encouraged guests to appreciate one other and know that everyone is meant to walk his or her own path.

“We honor Barbara Johns, a founding mother of this nation,” Woodley said. “We honor the Rev. L. Francis Griffin, a founding father of this nation. We honor Johns’ classmates, the Davis plaintiffs and their families. But the honor doesn’t end when we leave this sacred space. The honor really just begins when the doors close behind us. Be founders, I believe Barbara Johns and Rev. Griffin would tell us.”