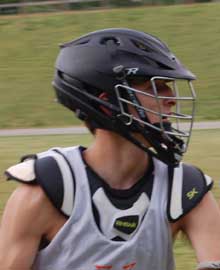 MY START: I came to Fuqua, and they just said, “We’re starting a new program. It’s called lacrosse.” I’d never even heard of it until I came here. So I said, “Alright, I’ll give it a try.” I just fell in love with it.

MY INSPIRATION: Craig Rogers really helped me. He played for UNC a while back. He’s an old guy. He used to coach here when it first started, and he really got me into it, and I think he’s the reason I still play.

FAVORITE SPORTS MOVIE: That’s a tough one. I like “Facing the Giants.” That’s a football movie. Just the life lessons it teaches you, a deep message and it’s football.

HOW I WOULD DESCRIBE MY TEAM: Small. We have (players) from 12th grade to eighth.

YEARS AS A LACROSSE PLAYER: This is the fifth year (I have played).