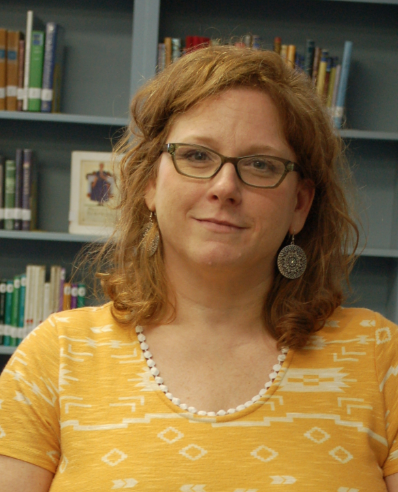 Sapp sticks to the library

Robin Sapp’s continued pursuit to further her education and learning led her to the Cumberland County Public Library on U.S. Route 60 — a place she probably thought she’d never end up working.

The library’s new director also wants the facility to do the same for residents and visitors.

Sapp, who was named to her position on Feb. 1, filling the vacancy of former director Jennifer Beach, obtained her bachelor’s degree in education and is working on her master’s degree in library science. Before taking the job in Cumberland, she worked as the literacy director and assistant library director in Nottoway County.

Sapp and her husband are from Richmond and Chesterfield, she said. “We’ve kind of migrated west.”

The Crewe resident said she spent her first 10 years of education in Amelia, then spent another 10 in Nottoway.

“I call this my second career life, because … before my children started school and before my husband and I got married, I did medical billing (and) worked for hospitals and private offices for a while.”

alternative education, helping students obtain their GEDs, and manned the school’s computer lab, which was open to the public.

“We had dial-up (Internet). And things have changed so much, but it was interesting,” she said. “I knew I wanted to stay in education, and I had always worked with the schools in education. And (that’s) when I saw the opportunity for the literacy director. …”

While Sapp has drawn many ideas from her experiences in Nottoway and Amelia, the first thing she wants to do in her new role is learn more about the people of Cumberland.

“I have a lot of ideas, a lot of things that I’d like to bring over, maybe try here that I didn’t get to do in Nottoway. But the first thing I need to do, which I’m working on, is to really form a relationship with the staff and the trustees and the volunteers (and) get to know them.”

Getting to know the community is also important, she said, including finding out what people need “and what they might want that we can do. So it’s not just so much my ideas, because you can have a great idea, but if everything else doesn’t fall into sync with it, it’s not going to work.”

“They’ve got a wonderful group of volunteers here. There are volunteers here every day, manning the reference desk, supporting the staff, so that’s great in times like these where library budgets are being level funded or even sometimes cut because you don’t have the money to hire someone else.”

Sapp said the role of libraries in communities both large and small would always be important.

“I think with every library, you can’t just be an island. You have to be part of the community, because if you’re not what the community wants, they’re not going to come to you. Here, this library is a hub here.”

She said many patrons take classes online in the library and perform genealogical research — more than just surfing social media.

“I think for this library, I think that we will remain important … hopefully forever, and evolve. You have to be fluid. If you’re not, we know that stagnant water just … nothing lives in it.”

Sapp said the library is the only place a person could come and get free education on anything they wanted and on any topic. “And, I’m all for free education.”

She said as long as people wanted to know something, “we’re going to provide what they want to know, or something about it.”

“I’m just excited about what the future holds, and it’s a great group of people,” she said. “I think that this is a great county, and I hope that the library will always be important to everybody here.”

For more information on the library, visit www.cumberlandcountypubliclibrary.org or call (804) 492-5807.

Board honors Foster for service