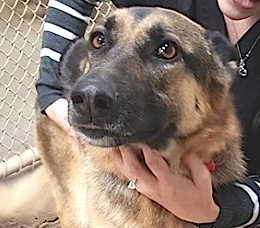 With eyes still reflecting the disaster, Lucy accepts comfort from a caregiver at Appomattox Animal Hospital.

Humans and animals alike experienced the trauma of the devastating tornado that hit Evergreen on February 24. Providing aid for animals that survived the storm is the goal of Virginia Donkey Rescue, Appomattox Animal Hospital and Appomattox County Animal Shelter.

“We’ve offered to board animals for free for people who lost their homes,” Dr. William Burger, of the Appomattox Animal Hospital, said. “We’ve set up a fund in the office for whatever the need may be — a generalized disaster fund. Some of these pets coming in need services like de-worming and vaccinations.” 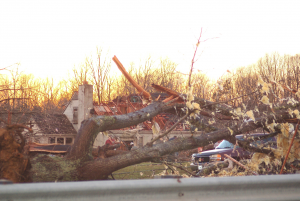 The powerful tornado that devastated Evergreen last week traumatized hundreds of residents. Animals were not exempt from the tragedy that destroyed or damaged over a hundred homes.

“That is where our hospital comes in,” Dr. Sabra Lucas, also of Appomattox Animal Hospital, said. “We are accepting financial donations and non-expired heartworm prevention.”

The animal hospital is already caring for animals who are now homeless.

“Some of these animals are suffering from stress conditions and are overdue on annual vaccines,” Lucas said. “Since we are uncertain how long they will be staying with us, it is imperative that these animals be updated and treated.” 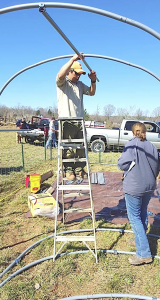 Volunteers with Virginia Donkey Rescue construct a temporary shelter for two homeless donkeys in Evergreen. After posting the need on Facebook, the group raised the money for the shelter in an hour. (Photo by Melissa Mills)

One of the dogs currently in residence at the hospital made repeated efforts to return home, Lucas related. Sadly, home was no longer there. Fearful that their pet would be hit by a car or truck, the owners brought the dog to the animal hospital until they could make other arrangements.

“Our pets are sometimes the only sunshine in our lives,” Lucas said. “In this case, these people lost everything but their pets and some any lost their pets. There was one dog named Dixie who saved her owner’s life before perishing in the tornado.”

Dr. Lucas relayed the gratitude of tornado victims whose pets are being cared for by the animal hospital.

“One dog is on several expensive heart medications  — all lost in the storm,” Lucas said. 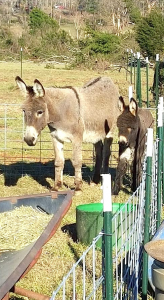 Two donkeys were all that remained of one Evergreen resident’s property. Volunteers from Virginia Donkey Rescue provided new fencing and a shelter. (Photo by Melissa Mills)

The dog’s owner was worried because she could only afford a few day’s worth of medication. When she went to the animal hospital to purchase the medicine, she found that someone had made a donation to cover that expense.

“The owner broke down and started crying,” Lucas said.

The day following the tornado, local residents donated over 1,000 pounds of dog and cat food along with other supplies to the Appomattox Animal Shelter. “We’ll never forget your generosity,” a Friends of the Shelter spokesperson said.

Closer to the scene of destruction, Virginia Donkey Rescue was at work to provide fencing and shelter for two donkeys.

“One of our board members saw a posting about a farmer in need with two donkeys that had lost their housing and fencing,” Kimberly Clark, of Virginia Donkey Rescue, said.

The farmer, an Evergreen resident, lost his home and other animals. All he had left was two donkeys — and he refused to leave them.

“The rest of the board quickly approved a fundraiser to provide a temporary shelter onsite,” Clark said. “Friends of theirs managed to get a fenced paddock cleared of all debris, glass, nails and metal.”

The next project for the donkey rescue group was to provide a shelter for the animals.

“We were able to raise the funds in about an hour,” Clark said. “Tractor Supply had what we needed in stock, so the next day we went out with volunteers and got (the shelter) up while the other group fenced the paddock.”

Melissa Mills was one of the volunteers onsite.

“I don’t normally work with donkeys, but I saw a post on Facebook that they needed help,” Mills said. “The story pulled at my heartstrings, so I volunteered to help.”

Before the weekend was over the donkeys had a new home.

“The owner was beyond thankful that his sweet pets would have a place to get out of the rain and wind,” Clark said.

Bringing comfort in the midst of despair was an overriding theme in Appomattox and surrounding communities last week.

“I think we’re just in the starting phases of this thing,” Burger said. “It’s brought a lot of folks together.”

The local veterinarian believes that the community will rebuild.

“Mother Nature always provides a way to bring it back,” he said. “We just have to work hard to do it.”

Hampden-Sydney College has postponed the announcement of its 25th president to Thursday at 11:30 a.m. “Weather conditions have made... read more