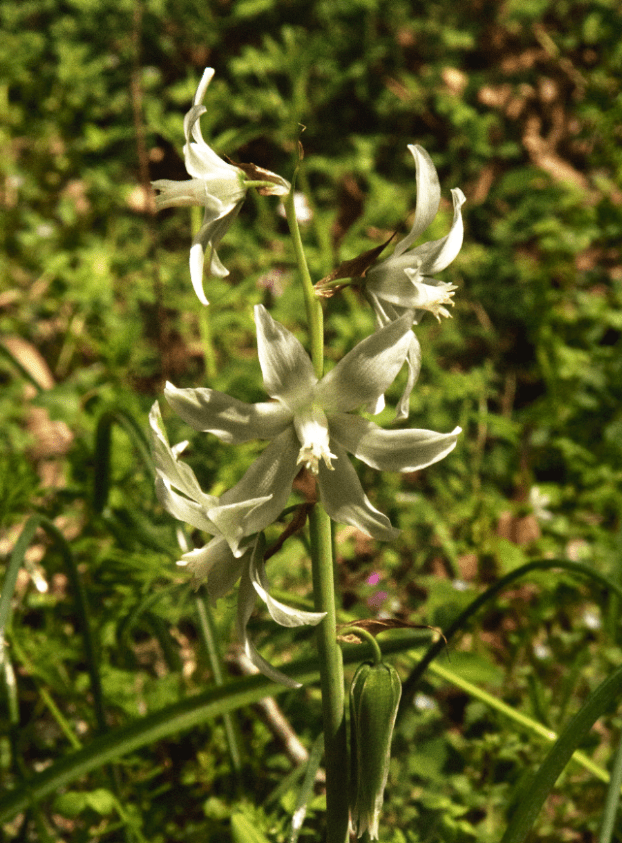 Friend or thug — it’s all relative

And then just before I left, I found a plant with leaves similar to those of wild garlic and a spike of white lily-like blooms. It was lovely and vaguely reminded me of some plant I had seen before. After a bit of research, I discovered that it was Nodding or drooping star of Bethlehem (Ornithogalus nutans), a close relative of the common star of Bethlehem (O. umbellatum) that’s invaded my garden. Both are lovely, but potentially problematic in some areas of the United States.

Drooping star of Bethlehem is a native of Europe and Asia, while its smaller cousin is from southern Europe and southern Africa. Both arrived here through the nursery trade. Both have attractive star-like blooms that appear in early spring. They are also quite sturdy plants, and that’s sometimes a problem when they escape from home gardens. These plants grow from small bulbs that are quite deep in the ground. They multiply through bulbils and seeds. In the case of common star of Bethlehem, it’s quite possible to go from a paltry few plants one year to full-on invasion several years later. Dig them out and miss a few bulbils, and you’ll have lots of new plants next year. Dig them out, pile them on the ground, and forget to put them in the trash, and you’ll hate yourself the next year.

In the wild, the common star of Bethlehem can grow just about anywhere — dry waste areas, flood plains, sunny areas, and shady areas too. It’s considered invasive in 10 states because of its ability to displace early spring ephemerals, and yet it’s readily for sale on the Internet.

In England, however, both plants are considered valuable additions to the home garden, and the Royal Horticultural Society provides planting guidelines, as well as suggestions for where to use them. They’re considered quite suitable for underplanting roses and using in beds in cottage gardens. So one gardener’s thug is another’s treasure. It’s all relative to location and competition.

If you happen to find your garden invaded with a star of Bethlehem, take action. All parts of these plants, but especially the bulbs, are poisonous. They contain cardiac glycosides, and they have the potential to choke out other more desirable plants. Purdue University recommends digging out the bulbs (be sure to dig way down) before they bloom. The plants can also be sprayed with an herbicide containing paraquat. It won’t completely eradicate them, but will certainly slow their spread. Dogged persistence and patience are essential.

Exotics that escape to the wild can be quite stunning. Just remember that they may upset the balance of nature in a particular area and become a problem. That said, it’s always interesting to find a plant that you’ve never seen before.

Spring won’t officially be here for a few more days, but it’s definitely time to hit the trails. There’s so... read more