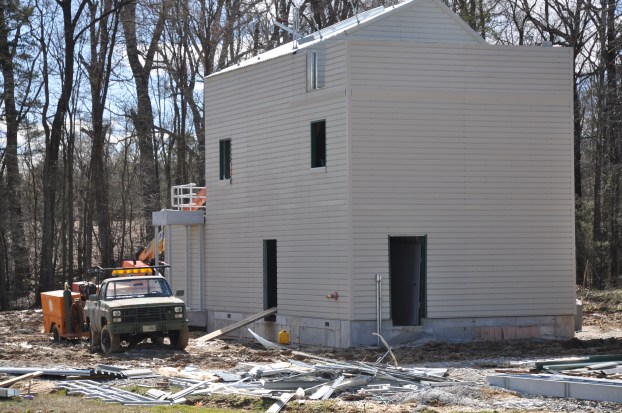 Farmville’s new burn building, which will simulate a burning house, is located off of Industrial Park Road.

Burn building completion on the horizon

Firefighters in Farmville and the Heart of Virginia will soon have access to a new burn building located off of Industrial Park Road.

According to Farmville Volunteer Fire Department Chief Andrew Goss, the burn building will be a training facility to perform live fire evolutions to better prepare and train firefighters.

“It’s going to be extremely beneficial to us for training,” Goss said. “Our firefighters, as well as the area’s firefighters, can have real fire experience and training on a routine basis to sharpen their skills and abilities.”

Currently, there is a burn building in Buckingham County on Route 56 off of U.S. Route 60.

According to Town Manager Gerald Spates, the building was funded from a grant provided by the state’s Department of Fire Programs. Goss said the approximate cost of the building was about $500,000.

He said the building will be used for training by simulating an actual burning building. Anytime that training can be provided instead of a real fire situation, it helps, Goss said.

According to the Department of Fire Programs, “burn building grants are provided for the construction, renovation or repair of burn buildings in the commonwealth of Virginia.”

Goss said the project is expected to be completed and ready for use in late March or early April.

“The new burn center places state-of-the-art training in a central and localized area to allow not only Farmville firefighters, but the entire area’s firefighters access to high-quality training,” Goss said.

“This training will ensure not only less property loss for the citizens that we serve,” Goss said, “but also better cohesion and improved tactics when multiple departments are on scene together at large incidents. Overall, it will improve fire protection services for this area of the state.”

The facility will consist of a metal building with two floors, according to Department of Fire Programs.

By Carly Shaia Special to The Farmville Herald The first step can be the hardest on the journey to recovery... read more