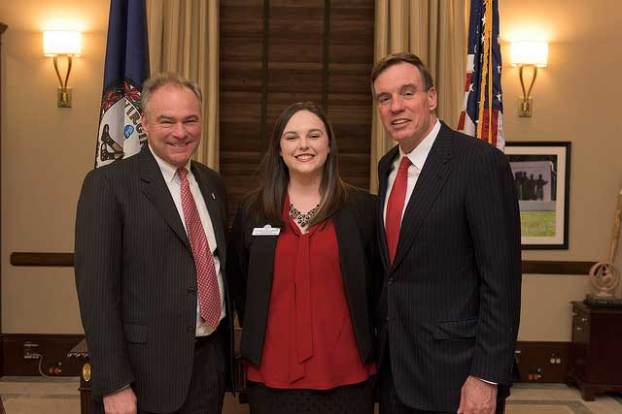 According to a press release from the Senate, the Halifax County native was one of many student leaders who attended from 20 Virginia colleges.

“It’s fitting that Longwood students have a voice at the table on a topic that is of importance to college students and their parents everywhere,” said Longwood spokesman Matt McWilliams. “Garner is a thoughtful and articulate representative of the Longwood student body, and we’re proud that she

had the opportunity to talk with Sens. Warner and Kaine last week.”

Garner currently serves as Student Government Association (SGA) president at Longwood University — one of many who attended the roundtable.

“It was a really exciting experience,” Garner said. “I was a little out of my element going from Farmville to Washington D.C., so it was nerve-racking starting out, of course. However, once I got to the Senate office building things got a lot more comfortable. Senator Warner and Senator Kaine were extremely down-to-earth, and welcoming to us. It ended up being more like a conversation with friends than with political leaders.”

The purpose of the discussion was to stimulate conversation about the rising costs of college and students expressed a desire to see more flexibility within loan application and repayment programs, according to the release.

“They showed true concern for the things all of us are going through because of student debt, and it was nice as a college student to be listened to and taken seriously about how we go about easing the student loan debt in the country,” said Garner.

The discussion was held in the Russell Senate Building and the talk took off as soon as the Senators arrived.

“Everyone was given the chance to kind of talk about their own experience and what they felt the senators could do to help,” she said.

In addition, Garner said the senators mentioned possible legislation that could help with loan interest rates and employers using pre-tax dollars to send employees back to school. The discussion lasted approximately 60 minutes.

“These campus leaders offered compelling personal stories to illustrate the crippling impact of student loan debt on a generation of young Virginians, limiting their options and opportunities as they graduate and join the workforce and plan their futures,” Sen. Warner said in the press release. “As the first person in my family to complete college, I know that if I had graduated with today’s levels of student debt, I would not have had opportunities to try — and to fail — with several of my early business ventures.”

Garner is from Clarksville.

What is Longwood building at the corner of Race and Redford streets? Does it have anything to do with the... read more