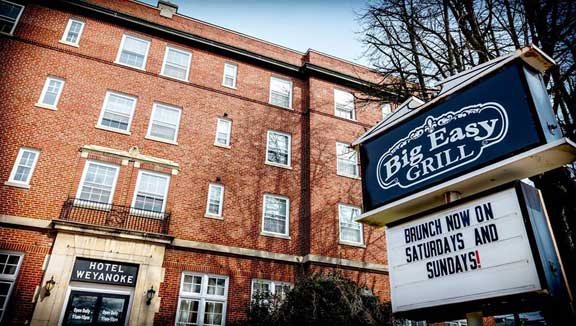 Signs for Big Easy Grill now occupy the space where the Badeaux’s Cajun Kitchen sign was only a few days ago. (Photo by Cruz Productions)

Badeaux’s no longer at Bar 202

The sign for Badeaux’s Cajun Kitchen has been taken down outside of the restaurant and Bar 202, located at 202 High St. in Farmville.

The window stickers for the restaurant have been taken down from display as well. Signs for Big Easy Grill are now in their places.

Thomas Rundstrom, general manager for Bar 202, confirmed the owner of the restaurant, Jason Badeaux, had left the partnership with the bar. “We’re renovating the restaurant a little bit, staying with the Cajun theme, and it’s just under new management,” Rundstrom said.

The two entities are housed in the Hotel Weyanoke, which is slated for major renovations over the next year.

“We’re just rebranding the restaurant, like I said. It’s a fairly simple changeover. We’re just getting new signs made, that’s why they’re down right now,” Rundstrom said before the new signage was erected.

“Jason’s no longer with us, I’m the new GM (general manager). He just went a separate way,” said Rundstrom.

Rundstrom declined to make any further comments on Badeaux.

Badeaux’s had joined the partnership with Bar 202 less than a year ago in March 2015.