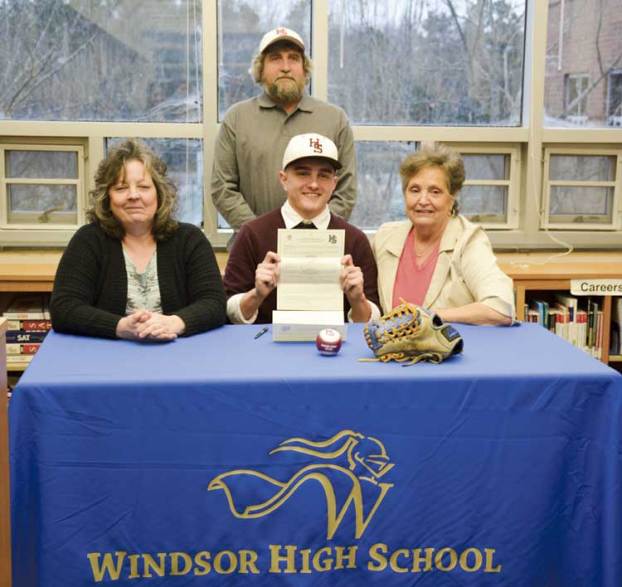 Cory Childress, middle, holds up his signed letter of intent to play baseball for Hampden-Sydney College. With him are his parents, Cheryl, left, and James, top middle, and his grandmother.

Surrounded by his parents and grandmother in the school’s library, Windsor senior Cory Childress recently signed his student-athlete celebratory form, otherwise known as a national letter of intent, to play baseball at Hampden-Sydney College.

Childress, a four-year letterman, will major in government and minor in military leadership and homeland security while he pitches for the Tigers, who compete in NCAA Division III.

“The small close-knit community at H-SC attracted me. I loved the instructional and athletic sides,” Childress said of choosing Hampden-Sydney over Ferrum College and Penn State Harrisburg.

“I have a good relationship with head coach Jeff Kinne and pitching coach Robbie Bailey. They’ve been recruiting me since September.”

Childress excelled from the start of his high school athletic career as the team’s starting pitcher and outfielder, as he was named TriRivers District Player of the Year as a sophomore. He credits a number of people for his success on and off the field.

“Windsor High School has helped shape me into the person I am by allowing me to know what it’s like to be a leader,” Childress said. “My parents, Cheryl and James; my brother, Ryan; the Lamb family; the Elledge family; the McCann family; the Old Dominion Hitters [17 and under] baseball organization; Mr. Harris; Mr. Scott; and former high school coach Robert Hedrick have mentored me and given me advice the I can use beyond baseball and have always supported me.”

The Tigers last season finished 11-21-1, 8-12 in the Old Dominion Athletic Conference. The team will graduate seven seniors at the conclusion of this season, including three pitchers, leaving the door open for Childress to compete for playing time upon his arrival in Farmville.