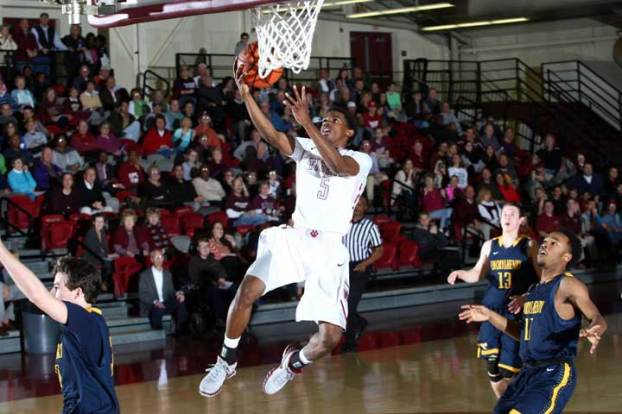 HOW IT HAPPENED: A combination of turnovers and cold shooting saw the Tigers trail from the outset. A close game for the majority of the first half, the Tigers trailed 21-18 at 6:43, but a 10-0 run from the Royals put EMU ahead 31-18 at 4:05.EMU built the lead to 15 going into halftime, capitalizing off 15 first half H-SC turnovers.

The Tigers trailed just six with 1:04 left, and Mike Murray (Norfolk/Norfolk Christian) made two free throws to find H-SC down just four points.Hampden-Sydney was forced to foul in the double bonus, and EMU made the first and missed the second, but they got the offensive rebound and made two free throws after another H-SC foul, making it a 73-66 game.

JaVonte Reddick (Richmond/L.C. Bird) drained a three pointer with 19 seconds left, and Khalil Davis bricked two free throws as the Tigers grabbed the rebound and Mitch Owens (Williamsburg/Walsingham) connected on a three with 4.2 ticks left on the clock.

Duncan stole the ball on the inbounds pass, Evans ended up with the ball in his hands and was fouled in the double bonus and made two clutch free throws to give the Tigers a 74-73 lead with just 1.7 seconds left.

EMU’s inbounds pass was knocked out of bounds just past halfcourt by Reddick with 0.8 seconds remaining, and the Tigers grabbed the sideline out of bounds pass just as the clock expired to seal the win.

TIGER TOP PERFORMERS: Murray scored a game and season-high 24 points with 19 coming in the second half. He was held without a field goal in the first half, but finished 6-14 from the floor and made 12 of 15 free throws.

STATS OF THE GAME: Hampden-Sydney didn’t secure a lead in the game until Evans’ two free throws with 1.8 seconds left in the game.

In the first half the Tigers shot 30 percent with just six made field goals and 15 turnovers but made 10 of 12 free throw attempts for 24 points. In the second half, H-SC scored 50 points as they went 16-30 from the floor 14-17 on foul shots, and gave up the ball just seven times.

EMU flourished in the opening stanza with 39 points, 40 percent shooting, and only five turnovers. The second half saw them go 10-30 from the field, 11-19 on free throws, and they turned over the ball 10 times.

The Tigers held a big advantage at the foul line where they made 24 of their 29 attempts.

UP NEXT: Hampden-Sydney hosts Guilford College on Wednesday at 7 p.m.