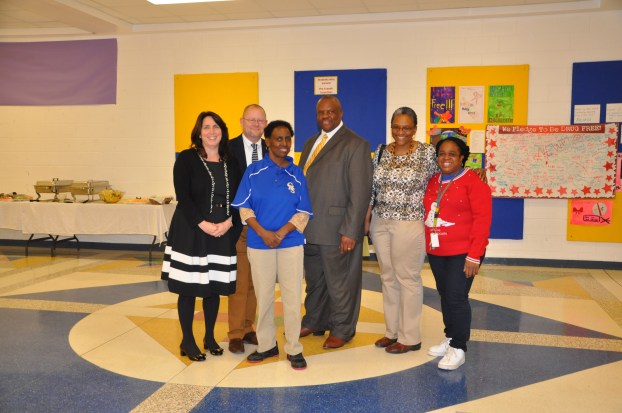 George Reid, middle, has retired from the Cumberland County School Board after 23 years of service.

After 23 years of service to public education in Cumberland County, George J. Reid Jr. has retired from the county’s school board.

“My time was very rewarding and at times difficult,” Reid, who represented District Four, said. He said when he was first appointed to the school board in June 1993, one of the major projects consisted of building new schools in the county. During the process, Reid said the school board faced difficulty due to a change in the board of supervisors seats every four years.

“Our students did well, but we always thought they deserved better,” he said.

According to Reid, it took approximately 15 years to complete all three Cumberland schools — the elementary, middle and high schools.

“This is a bittersweet moment,” said Division Superintendent Dr. Amy Griffin. “Reid has served the Cumberland County Public Schools community with the utmost caring, dignity and respect.  He deserves this time to devote to his family and friends. We will truly miss his quiet leadership.”

During his time on the school board, Reid has served in the position of chair and vice chair.

“Reid has remained a constant and dedicated voice

for education. During his tenure on the board, many great changes have taken place in the school division,” Griffin said. “He was instrumental in building new schools — the elementary school in 1996 and the new middle/high school complex in 2008, in approving funding for a one-to-one laptop initiative for the high school, and in supporting initiatives for school improvement.”

In the 2011 general election, Reid was re-elected to the school board by write-in votes.

“He once tried to retire from the board, but was so highly regarded that his constituents went to the polls and elected him as a write-in candidate,” Griffin said. “With his strong sense of duty, he accepted the office and continued to serve one last term.”

Reid said during his time on the board, he has seen board go from an appointed body to an elected one.

Reid said the new elected process afforded more work due to the fact that the individual was required to collect signatures and campaign in order to secure a seat on the board.

Griffin said the school community will continue Reid’s legacy of high expectations, standards, and character to ensure a quality education for every student.

“I just want to thank the voters of the Fourth District for electing me all these years, and I hope that we did a good job for them.”

In collaboration with the Cumberland County 4-H Program, the county’s middle school has implemented the 4-H Mentoring: Youth and Families... read more