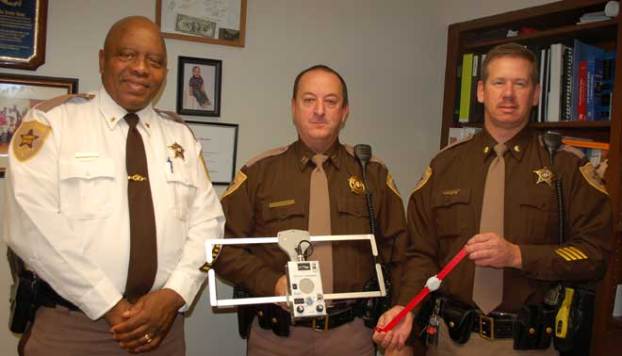 There was only one difference among the three people who walked off from their homes on late last year in Prince Edward, putting themselves in danger and splitting their families’ nerves for hours, imagining never seeing their loved ones again.

Only one was enrolled in the Project Lifesaver program offered by the Prince Edward County Sheriff’s Office — a program that’s saved lives and millions of tax dollars.

Project Lifesaver — a program that includes attaching a tracking bracelet to the arm or ankle of a family member — allows authorities to find an elderly person with dementia or an autistic child who’s wandered into the woods much faster than the traditional method of searching with dogs, helicopters and manpower.

“It’s a transmitter that’s worn as a watch that’s put on a person by us,” Maj. David Wilmoth said of the program. “If they walk off, we can track them with a tracking system.”

According to Project Lifesaver International’s website, “The primary mission of Project Lifesaver is to provide timely response to save lives and reduce potential injury for adults and children who wander due to Alzheimer’s, autism and other related conditions or disorders. The task of searching for wandering or lost individuals with Alzheimer’s, autism, Down Syndrome, dementia or other cognitive conditions is a growing and serious responsibility.”

The program, which was initiated in 2006 in Prince Edward, has about 13 people enrolled in the program, Wilmoth said.

Since then, the department has made at least 20 or more searches using the equipment, resulting in the successful location of people.

While only one of three who walked off that afternoon last month was enrolled in the program, another has since signed up, Wilmoth said.

When someone walks off, it’s hard to find them in a rural area, he said, especially when the temperatures fall. “Time is a factor in that,” he said of searches.

“The last person that walked off, it took two canines and a helicopter and a lot of manpower to locate the person,” he said, which equates to lots of money and manpower taken from other regular operations.

The initial fee to enroll in the program is $300, Wilmoth said, and an annual $20 after the first year. “We’re not making a profit or anything. We do it at cost,” he said.

“We can locate them,” Wilmoth said.

“More importantly, because time is of the essence, every minute lost increases the risk of a tragic outcome.”

Capt. Jimmy Farley supervises the program. “It saves a lot of time, a lot of resources that we wouldn’t have to use … and a lot of manpower,” he said. “Normally, if we wouldn’t have had the tracking bracelets on any of these individuals, we would have had to call the state police tracking dog, state police helicopter, the local fire departments, local rescue squads. Whereas now, if any of these individuals have these bracelets on, we don’t have to call any of those most of the time because we can pretty much find them within a reasonable amount of time, within an hour normally.”

Electric utilities and the Virginia Department of Transportation are readying for Winter Storm Jonas. The storm could bring gusty winds... read more