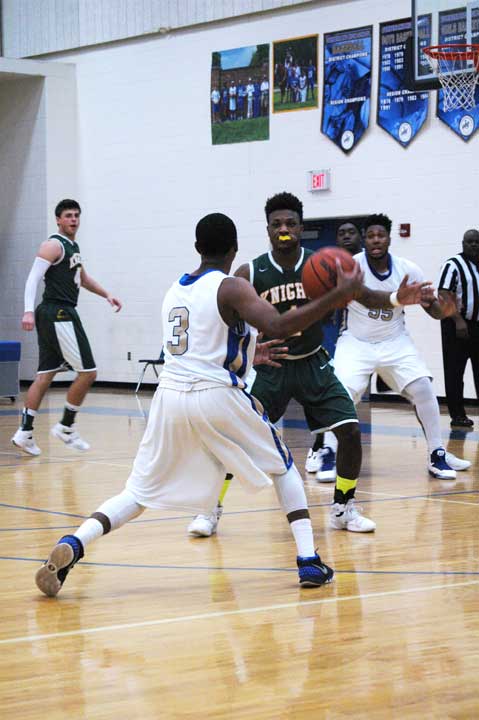 After a 25-25 tie at halftime, the Cumberland High varsity boys basketball team kicked into high gear in the second half, scoring 34 points — half of them by Ahmad Booker — to take a 59-40 James River District win over rival Buckingham in the “Battle of Route 60.”

“We did pretty good tonight. It is probably the best we have played all year,” said CHS head coach Tyrone Mosby.

“We played together as a team. Our defense was on point, and that set the tone for us early in the first quarter. We slacked up near the end of the second quarter. We picked it back up about halfway through the third, and carried it into the fourth.”

The first half was a thriller, as the teams traded field goals and three-pointers trying to keep up with each other.

Both teams played a scrappy game in the first half, but cleaned up their game in the third quarter.

At halftime, Mosby said, he gave his team the pep talk they needed to get back in the game.

“I told them (in the locker room) that we messed up and gave, at least, a three-point lead away,” he said.

“I just tried to keep them focused on what we are supposed to be doing.”

The third quarter saw Ahmad Booker score seven points for the Dukes, while Jordan Woodson notched six and DeShawn Liggins scored two. Their efforts gave Cumberland a lead it would not relinquish. Booker sealed the win with 10 points in the fourth quarter.

“It was probably his best game of the year,” Mosby said of Booker. “He got quite a few steals, made some big three’s and gave us some points in the paint. He has been behind quite a few games, and it was nice to see him come out. I am just satisfied and glad we got this win against a rivalry team.”

Buckingham head coach Russ Gowin was not available for comment after the game.

With the win, Cumberland improved to 6-4. Buckingham dropped to 6-5.

Cumberland will return to its home court on Wednesday at 7 p.m. against the Nottoway Cougars (5-6).

Buckingham will travel to Central Lunenburg (4-6) on Wednesday for a 7 p.m. matchup against the Chargers.