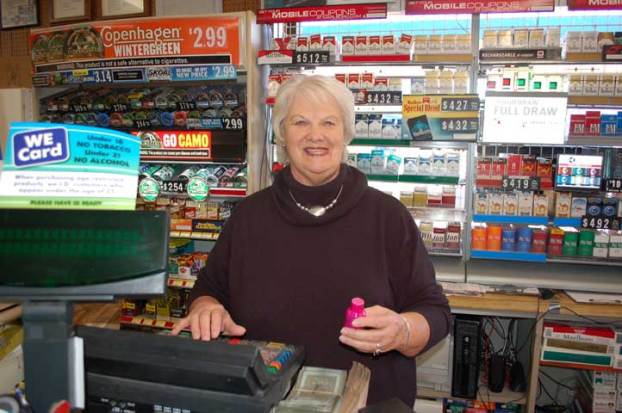 Carolyn Jamerson, of Dillwyn, stands behind the counter where she’s greeted both locals and travelers from for 34 years.

Longtime Fas Mart Store Manager Carolyn Rush Jamerson has bid farewell to the retail business after 34 years of working in the same place in Dillwyn.

“I will miss seeing customers,” Jamerson said. “I met a lot of really nice people I grew fond of.”

Jamerson started working for Fas Mart in Dillwyn on Aug. 1, 1981.

When Fas Mart was eventually sold, she was invited to manage the store. Though Jamerson said she never had managed a store before, she was eager and willing to learn.

“It was an opportunity I never even thought I’d have,” she said.

Jamerson said during the last 30-plus years, she never held another job besides the one at Fas Mart — a hotspot where locals sit and chat, sipping coffee for hours.

According to Jamerson, the store was built around 1980 and she was the first manager of the business.

Jamerson said the biggest change she saw during her time was the growth of the establishment and the types of food offered in the store.

Originally the store started out with a lunch counter and grill, she said.

As time progressed, a fryer was added and different foods were introduced, such as macaroni and cheese and the store’s famous fried chicken.

Matthews said Jamerson always supported her and saw to it that she was successful, giving her chances to prosper. “She was a great manager,” said Matthews. “I loved working for her.”

Although she will miss being at the store, Jamerson plans  to “spend time with my family and be more involved with my church.”

Jamerson said some of the activities she has enjoyed since retiring include going next door each morning to enjoy coffee with her sister and riding down to the Fas Mart to have coffee and catch up with old friends.

Jamerson said she has a 4-year-old great-granddaughter whom she enjoys spending time with.

“She had a lot of customers that came here just to see her,” said Richards. “I haven’t met a person yet that doesn’t like her.”

In collaboration with the Cumberland County 4-H Program, the county’s middle school has implemented the 4-H Mentoring: Youth and Families... read more