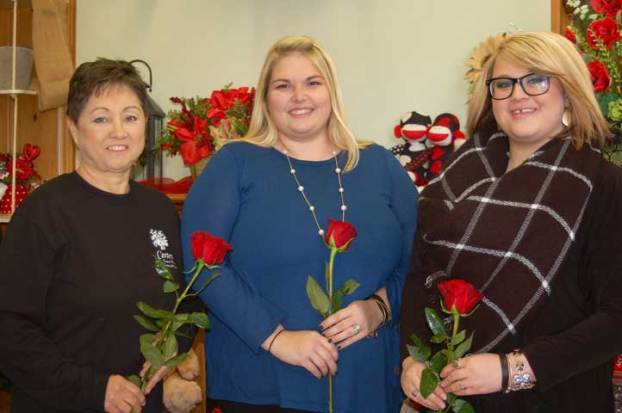 The Farmville Junior Woman’s Club was first named recipient of Good Neighbor Day donations in 2014. The club decided that year to use the money for local families in need.

Held every year in September, Good Neighbor Day is organized by florists. On that day local florists give away dozens of roses with a neighborly stipulation: each recipient keeps one rose and gives 11 to friends and neighbors. In return, rose recipients may leave a donation in collection jars at each florist shop. Donations are then presented to a worthy cause in the community.

When local florists named FJWC the Good Neighbor Day recipient again in 2015, the club decided to take its Christmas project to the next level — they initiated a Christmas Mother program.

“The first step was to interview the organizers of the Amelia Christmas Mother program,” Holman said. “It was pretty incredible to see what they have done — they help hundreds of kids every year.”

Holman found the Amelia program to be a joint effort with Social Services, churches, businesses and schools all taking part.

“That’s something we can strive for in our county,” she said. “There’s definitely a need for it here.”

FJWC is currently seeking community members to sit on the Christmas Mother committee.

“We’ll be taking nominations for the Christmas Mother soon,” Holman said. “ The Salvation Army has agreed to partner with us, and we’re going to the churches and civic organizations like the Jaycees, Lions and Rotary. We want to put a local face on this.”

This past Christmas the FJWC had $5,000 to purchase gifts.

“The majority of funds were from Good Neighbor Day — just over $4,000,” she said. “The Juniors added to that with Breakfast with Santa, Breakfast with the Easter Bunny and Heart of Virginia proceeds.”

The 2015 distribution was held at Farmville Presbyterian Church.

“This year we stuck to toys — what kids put on their wish lists,” Holman said. “After a family qualifies, parents come and shop for gifts — no kids allowed that day.”

This method, Holman added, involves parents in the gifting process.

“Parents get to pick the gifts and wrap them,” Holman said. “We want every kid to wake up on Christmas and get a toy they want. This is about the pure joy of Christmas — getting something good.”

Club members are grateful to everyone in the community that helped — the Salvation Army, Farmville Presbyterian Church and all the businesses and individuals who contributed on Good Neighbor Day.

“It’s a lot of work for the Farmville Junior Woman’s Club,” Sid Allen, of Rochette’s Florist said. “Hats off to them for spearheading this project.”

“It’s great to see the community do something like this for the children,” Carolyn Jones, of Carter’s Flower Shop, said.

Despite all the work — and sometimes stress — distribution day makes it all worthwhile.

“This year one mom peeped into the box and saw we had found a particular doll her daughter wanted,” Holman said. “She was so excited — she was literally jumping up and down.”

“It was a big community that made that mom so excited about a doll. It was everybody that made it happen,” she said. “We want to grow on that and get a lot bigger.”

For more information on the Christmas Mother program contact Georgia Holman at (434) 547-8737 or holmangac@kinex.net.