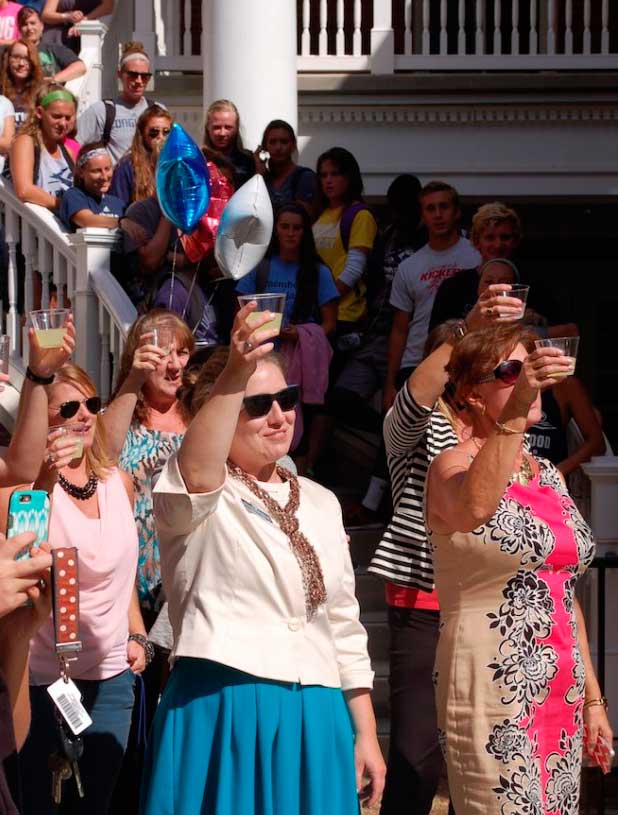 Longwood students, faculty and staff cheered the vice presidential debate announcement in September at Beale Plaza on Brock Commons — a short walk from Willett Hall where the debate will be held in October. Celebrating in the foreground are Nicole Perkins, left, and Brenda Ferguson.

The last 12 months have produced numerous milestones in history for the Heart of Virginia — from the announcement of Longwood University hosting the sole vice presidential debate in October to a $35 million solar facility approved for construction in Buckingham County.

Though hundreds of stories have been published on this front page, The Herald staff selected ten that particularly stood out as impactful.

In September, Longwood University announced that it would hold the sole vice presidential debate in October in Willett Hall — a story that tops our list this year.

The event will bring the eyes of the nation to the college on Oct. 4.

According to the release,

the 2012 vice presidential debate at Centre College in Danville, Ky. attracted 51.4 million viewers nationally and countless more around the world.

Typically, several thousand journalists travel to the debate site to cover the presidential and vice presidential debates, according to Longwood.

“Longwood’s selection for the 2016 vice presidential debate is a genuine game-changer for Farmville and the heart of Virginia,” said Farmville Mayor David Whitus, a 1983 Longwood graduate. “It’s a yearlong opportunity to showcase our community and turn a spotlight on our unique, powerful history and vibrant downtown that serves as a true regional hub. We have much to offer and welcome the chance to shine.”

“I believe that no campus in America could be more fitting for this remarkable and great responsibility in our democratic process,” said Longwood President W. Taylor Reveley IV in a message to the university community.

The win would result in Clark becoming the first African American and woman to hold the seat.

“I have told people, and I had continued to say I was prayerfully optimistic …,” Clark told The Herald after her June win. “Brian is a well-respected prosecutor here, and I knew that it was going to be very difficult because of that and because he works here and so I tried to remain realistic and calm the whole way through, and I just said I can only do my best and as long as I did that, then I said I will be … happy at some point with whatever the results may be.”

In December, Longwood University released its proposed master plan — one that includes baseball and softball diamonds in downtown Farmville, a performing arts center, a roundabout at the intersection of High and Oak streets and Griffin Boulevard, and a streamlined pedestrian pathway from downtown to the Moton Museum.

The plan envisions Longwood’s growth through 2039.

According to the draft plan and conceptual maps, a baseball diamond would be located at the former location of Buffalo Shook on West Third Street, which is now owned by Walk2Campus. University officials believe a first-rate baseball facility could attract a professional minor-league team during the summer months to complement spring usage by the Longwood baseball team.

In late December, a settlement was reached between Charleys Waterfront Cafe and Farmville furniture merchant Richard F. Cralle Jr. following months of litigation over an alleged breach of contract and an eviction attempt.

According to a press release from William Stanley, the attorney for Charleys, all claims in the litigation were settled.

Part of the settlement included a new five-year lease that will run through May 15, 2020, with a renewal option for an additional five years. The settlement also stated that the popular Farmville restaurant will lease and commercially develop space underneath the restaurant as an extension of its current operations or for another business compatible with the restaurant.

Dr. Christopher B. Howard was named the eighth president of Robert Morris University (RMU) in Pittsburgh, Pa. in September.

Howard, 46, the president of Hampden-Sydney College (H-SC), will join RMU on Feb. 1, according to an RMU news release.

H-SC’s board of trustees has initiated a presidential search with the goal of naming the next president on March. Dr. Dennis G. Stevens, provost and dean of the faculty, is serving as interim president following Dr. Howard’s departure.

The most shocking political move this year came when U.S. Rep. Robert Hurt announced that he wouldn’t re-election at the end of his term in Congress.

Hurt, a Republican, who has served for five years in the U.S. House of Representatives, said he looked “forward to returning to private life at the conclusion of my current term and declare that I will not seek re-election to Congress next year.”

Hurt previously served on the Chatham Town Council and in the Virginia General Assembly in both the House and Senate before running for Congress.

Supervisors in Buckingham County approved a special use permit in November that will allow for construction of a $35 million solar energy facility at 623 High Rock Road.

Ten percent of the project cost, or $3.5 million, is expected to contribute directly to the local economy.

According to the permit request, Virginia Solar, LLC will construct a facility, which would include ancillary support facilities and electrical interconnections with a generating capacity of 20 megawatts of electrical energy to be transmitted on an electric utility’s distribution line. On an annual basis, the project could produce about 40 million-kilowatt hours of electricity, enough to power up to 4,500 homes, according to Virginia Solar.

ACP purchased the land on Aug. 20 from Variety Shade Landowners of Virginia Inc. for $2.5 million, according to Norvelle.

If approved, the project would result in the construction of a 550-mile natural gas pipeline from West Virginia through Virginia and North Carolina, spanning Buckingham, Cumberland and Prince Edward counties.

The project has met opposition in Buckingham, notably from the Yogaville community.

The sale ended three generations of ownership of the Wall family.

“The Herald celebrates its 125th birthday in 2015,” said third generation publisher Steve Wall, whose grandfather, J.B. Wall, purchased the newspaper in 1921. “…I’m ready for another newspaper family to take the helm,” he said in the news story.

Since May, Farmville Newsmedia, LLC has purchased The Charlotte Gazette and The Kenbridge-Victoria Dispatch.

10. Essayist could win home and land

Seventy-year-old Carol Carper, who owns Newstead Farm in Cumberland, announced in October that she would give her home to the person who best writes an essay saying why they’d like to own Newstead Manor and operate Newstead Farm.

The century-old home includes 58 acres of property valued at $1.5 million near Cartersville.

Carper, a certified wedding and event planner who also raises purebred Katahdin Sheep on the farm, cited retirement as one of her reasons to get rid of the historic home. 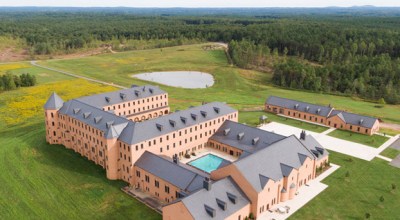