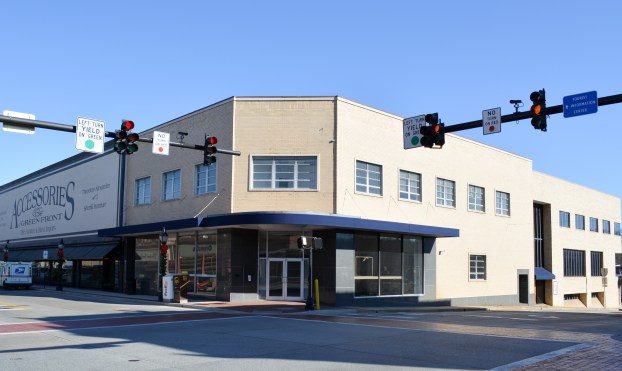 The Longwood University bookstore, currently located at the Midtown Square under a Longwood Landings student housing building, will move to the former First National Bank Building at the northeast corner of Main and Third streets.

Longwood University’s bookstore, along with Starbucks coffee, will move to the former First National Bank Building at the northeast corner of Main and Third streets.

“Walk2Campus Properties announced Monday that Walk2Campus has completed the purchase of the building, and the Longwood Real Estate Foundation will rent the basement and first floor for the bookstore, currently operated by Barnes & Noble, leaving the upstairs for future development,” the release stated.

The release didn’t include a sale price.

The move will provide an anchor tenant for the heart of Main Street and substantially increase the number of Longwood students and staff walking and shopping downtown as well as providing an important additional destination for visitors, the release stated.

The bookstore is currently located at the Midtown Square on the ground floor of a Longwood Landings student housing building.

“Barnes & Noble and Walk2Campus are currently working with Julie Dixon, lead architect of Rosney Company Architects, to plan the building’s rehabilitation. English Construction will be the general contractor, and construction is expected to begin next summer.”

“Every great college town needs a bookstore right in its center,” said Longwood President W. Taylor Reveley IV. “Longwood is intently focused on helping Farmville reach its potential with a truly great college-town Main Street. Working with a great partner in Walk2Campus to harness the vibrancy of our bookstore and add to the great momentum already underway along Main Street fits perfectly with our mission.”

The idea emerged from discussions with stakeholders, led by Farmville Downtown Partnership (FDP), which conducted a feasibility study related to the site earlier this year.

“The economic restructuring committee of the Farmville Downtown Partnership conceived of a new site for the Longwood bookstore while conducting the study on the best use of the two former bank buildings at the intersection of Third and Main Streets. The study was funded by a $35,000 grant from the Virginia Department of Housing and Community Development. The committee analyzed market data, worked with a consultant and met with the architectural firm Frazier and Associates, brainstorming uses and possible financial incentives such as historic tax credits for potential developers of either building,” the release stated.

The downtown partnership team took Longwood’s proposed master plan concept of a renewed emphasis on connecting downtown with the campus into consideration when planning.

“The light bulb just went on between committee members,” said said Sheri McGuire, chair of the FDP Economic Restructuring Committee and executive director of the Longwood Small Business Development Center. “A big retail draw to students is where they buy their books and supplies throughout the year, and that type of retailer fits the market study findings quite well. Through various conversations with Longwood, we learned that the timing could be right to relocate one of the biggest draws of student traffic, the Longwood Bookstore, downtown.”

Walk2Campus had investigated turning the property into apartments several years ago, but couldn’t find a way to make the project financially viable, the release stated.

“The building is key to downtown and has been studied by numerous developers over time,” said Matt King, president of Walk2Campus. “It has been a very challenging situation for any prospective purchaser. Were it not for the collective community effort this year, the status would not have changed.”

“The downtown partnership’s primary role was to put those pieces together — market data, financial analysis, and possible incentives — connecting people and resources to make it happen,” said McGuire. “We are so thrilled to have been able to help bring new life to that space.”

According to the release, the economic feasibility of the project hinges on the Virginia Department of Historic Resources approving an update to Farmville’s historic district. “The last survey of the district was completed in 1989, making buildings that were 50 years old or more at the time of the survey part of the historic district. Walk2Campus submitted a petition to have a new survey for the district completed. The update would expand the period of significance to 1964, thereby incorporating the history of the Civil Rights Movement in Farmville. Historic tax credits would be made available to 49 new buildings in the town of Farmville, making the First National Bank eligible for federal and state rehabilitation credits. Alison Blanton of Hill Studio is leading the petition project.”

The second story of the bank building will have roughly 5,000 feet of available office space that can be built to suit. The suites there would range from 3,000 square feet to 500 square feet in size and would have dedicated parking, the release stated.

“This is a terrific addition to the heart of Main Street,” said FDP President John Miller. “Every town needs a convenient bookstore, and Barnes & Noble’s new location provides residents, students and visitors with another option to find a great book or gift downtown.”

“We’re grateful that the Longwood Real Estate Foundation and Walk2Campus were willing to collaborate with the Farmville Downtown Partnership,” he said. “Our shared vision for the future of downtown Farmville is becoming a reality.”

One seriously injured in 460 crash Sunday

One person was seriously injured in a single-vehicle crash on U.S. 460 near Buffalo Creek on Sunday. The accident was... read more