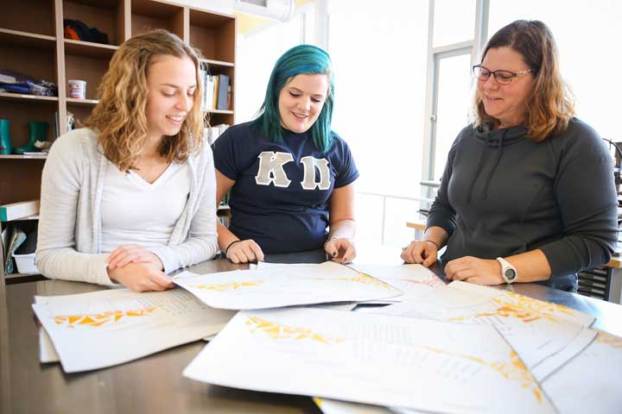 A limited-edition handmade letterpress broadside that will be sent to selected members of an international organization bears the mark, literally, of Longwood University.

Kerri Cushman, associate professor of art, and seniors Laura Kahler and Amanda Mixner designed and printed this year’s edition of the broadside that is part of Hand Papermaking’s end-of-year fundraising appeal. The 100-edition broadside, produced in collaboration with prominent papermaker Bernie Vinzani, will be mailed in December to donors of at least $100.

“It’s considered an honor to be asked to do this,” Cushman, a sculptural book artist who teaches papermaking, bookbinding and letterpress printing, said.

Broadsides, historically poster-like announcements or advertisements, are popular these days among smaller printers and publishers as a fine art variant. Typically they consist of an image and text, such as a poem or quotation, and are meant be framed and hung on a wall.

After Cushman was asked to handle the printing end by Tom Bannister, executive director of Hand Papermaking, she enlisted Mixner and Kahler, who had previously worked with her on various projects.

Mixner, a graphic design major, designed the layout. Kahler, a book arts and printmaking major, helped with the printing. Both students also helped complete the image — mostly a cross-sectional diagram of the papermaking process — by adding small yellow shapes that represent paper pulp going through a beater.

The 12-by-18-inch broadside features a watermark image and a poem by Vinzani, who coordinates the book arts program at the University of Maine at Machias. The broadside is double-layered, with a white sheet backed by a thicker gray sheet. Each is individually numbered and signed by Cushman and Vinzani, who has been making paper since the mid-1970s.

The image on the broadside was redrawn from a diagram in the 1929 book “Modern Papermaking.” The poem, “From the Silk Road,” in embossed text, was inspired by a trip Vinzani took to Xian, China, where papermaking originated and the Silk Road begins.

The work at Longwood, which took about two weeks, began in early November after Vinzani sent unprinted sheets. The broadsides were printed in the letterpress studio in Bedford Hall, which has four letterpress presses and supports the Book Arts/Printmaking concentration. The presses are used for a variety of fine press and limited-edition printing: business cards, announcements, wedding invitations, artist’s books, honorary diplomas and the broadsides for the “Hampden-Sydney Poetry Review,” which Cushman has printed for several years.

“We’re really lucky. Not many schools have something like this,” said Cushman. “We have one of the best papermaking facilities in the country. We can do the entire process here, from making paper to printing on it. A lot of creative work comes out of here.”

Three of the presses are Vandercook #4 printers, manufactured by the now-defunct company that dominated the 20th-century proof press industry. The other printer is a Vandercook SP20, which is similar and slightly larger.

“Before World War II, Vandercook developed different models of the flatbed printing press,” said Cushman. “The most popular of these models was #4, which was first manufactured in 1935 and produced through the 1960s. Many are still in use today. When printing started changing in the 1990s, these presses were being sold for scrap metal.”

Letterpress printing and the use of moveable type, invented by Gutenberg in the mid-15th century, generally started becoming out-of-date in the 1980s with the rise of computers and commercial printing. Today, it has been revived as an artistic craft form, often being used for fine art and stationery. Hand papermaking, in which paper traditionally is fashioned from cotton fibers from rags, also has been reborn as an art form.

“Bernie is well known for his papermaking skills, which fortunately he’s passing on to his students. It’s a tradition that has almost died out,” said Cushman.

Like Cushman on the printing end, Vinzani involved students in the papermaking. “This was an interesting collaboration of two universities, which is rare and which I like,” he said. “The students at both schools gained valuable experience. Kerri’s a real gem. Between us, I think we came up with a beautiful broadside.”

One unusual feature of this broadside is its watermark, which is like the papermaker’s invisible signature and is made by varying the paper’s thickness. Usually the watermark is small and in a corner; Vinzani made the image the watermark.

In addition to the broadside’s role in the organization’s fundraising campaign, it also promotes the art of papermaking, said Cushman, a member of the governing board of directors of Hand Papermaking. This is the seventh year for the broadside.

“Like a lot of nonprofits, we rely on our end-of-year fundraising appeal, so we really appreciate Kerri’s and Bernie’s assistance,” Bannister, whose organization publishes a magazine and newsletter, said. “Last year’s broadside moved us from red ink to black ink, which is crucial for a small organization on a modest budget.”