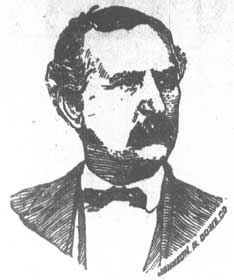 This woodcut of Gov. P.W. McKinney appeared on page two of the very first issue of The Farmville Herald. They published an open invitation to their readers: “If you want to see your picture in The Herald, just as our good-looking governor’s was, then send in the woodcut.” No further pictures were printed until they acquired their massive new printing press.

When Farmville lawyer Phillip Watkins McKinney (1832-1899; HSC 1851, CSA) was elected Governor of Virginia in November 1889, the Randolph House hotel was renamed the McKinney House in his honor. When a group of wealthy Southern businessmen met at the McKinney House in August of 1890 to organize the Farmville Coal & Iron Company, it was totally appropriate, because it was Gov. McKinney, more than anyone else, who was responsible for getting them together.

From Fort Payne, Ala., came Judge L.L. Cochran, Dr. W.E. Quin, H.B. Campbell and Mr. Alden. From Salisbury, N.C., came Mr. Arendell and Kerr Craige. They were met by Dr. J.A. Sexton, from Raleigh, N.C., who showed them the coalfields of Prince Edward, Cumberland and Buckingham. Before they departed Farmville, $10,000 had been raised to begin securing lands for the new company.

They purchased “a thousand acres of valuable building sites, touching three sides of [Farmville]. Some of [it] is actually within the corporate limits of the town.” The names of the tracts acquired are legendary—Hurd, Ely, Fallwell, Watkins, Burger and Richardson. These lands were to be subdivided into a new town, such as North Farmville or South Farmville. The Farmville Herald of Nov. 28, 1890, reported on page one: “There will be four eighty-feet avenues running through South Farmville, and such drives as they will furnish are not known in all the South.” Thus, what was originally envisioned as the Town of South Farmville turned out to be The Avenues of the Farmville of today.

Large lots were set aside for manufacturing plants. A fact not mentioned in Bradshaw (1955 & 1994), and thus lost to local history, is that almost simultaneous with the Farmville Coal & Iron Company, the Farmers’ and Merchants’ Manufacturing Company of Farmville was created. Its sole mission was to attract manufacturing plants to Farmville so that Prince Edward County’s rich resources would not be sent elsewhere, but would be used to create manufacturing jobs here. The general manager of the company was respected Farmville businessman W.H. Barrow.

Thousands of acres farther from Farmville, in Cumberland and Buckingham, were optioned as coalfields. These tracts, not as well known to Farmvillians, were Satterfield, Jackson and the old Coal pit on Mrs. Nancy Allen’s farm.

The preliminary work done, an even larger group of Southern venture capitalists started arriving by train in Farmville on Wednesday, Nov. 12, 1890. In dramatic fashion typical of an astute politician, a delegation headed by Gov. McKinney arrived on the 10 p.m. train from Richmond.

The next day, Thursday, Nov. 13th, 1890, Farmville hosted more well-dressed, well-heeled and well-mannered gentlemen of the South than ever before in its history. At 4 p.m. Dr. Sexton called the meeting of this group to order in the Courthouse, and read a long report to the assembled gentlemen. Among other things, he spoke of the ongoing engineering studies on the tracts that the company had acquired options on. “I hope that before you leave the town we will be able to show you twelve to twenty-four feet of coal at the centre. I have the testimony of several practical coal men, who state unhesitatingly that we have coal in the greatest abundance. I have had faced up enough coal to give us a million tons a year for a third of a century.”

After hearing this, when the stock book was reopened with the announcement that this might be the last chance “to come in and share the honors of being in on the ground-floor,” it is no wonder that pure bedlam broke out and before things quieted back down, more than $100,000 in additional stock had been purchased.

It wasn’t until later in the day that the name of the company —The Farmville Coal and Iron Company—was made official. The purpose of the company was “to buy, lease, or rent land in the counties of Prince Edward, Cumberland, Buckingham and Appomattox; to mine or work the same for coal or iron, or any other mineral or metal; to develop the same; to lay off the same into lots, pieces, or parcels, separated by streets or roads; to erect, build, maintain, and operate on the same furnaces and mills for the smelting, rolling, and manufacturing of iron, and for the manufacturing and making of all articles which can be made or manufactured of iron or any other metal, or of wood in combination with iron or other metal.” It was agreed: “The place at which the principal office of the company is to be kept is Farmville, Prince Edward County, Va.” (The company office was subsequently located on the corner of Third & Main Streets.)

Less than a week later, on Tuesday, Nov. 18, 1890, the first load of coal was brought to Farmville. “When the load of magnificent coal pulled up in front of the McKinney House, fresh from the newly-discovered mines, an eager crowd soon gathered, and, strange to say, more than one old croaker was heard to exclaim, ‘I told you so. Knew it was there all the time.’”

On Friday, Nov. 21, 1890, 5,000 copies of the very first issue of The Farmville Herald (Vol. 1 No. 1), which was printed elsewhere, were distributed in Farmville, free of charge. The second and third issues were given away, too, albeit they advertised the subscription price as “$2.00 a year, always in advance.” Gov. McKinney was one of the first subscribers, sending a check for $2 along with a long congratulatory letter that stated: “Tolerate no croaking. Discourage all murmuring. One can talk down as fast as two can build up. One bad man with a torch can destroy in an hour what it cost good men many years of labor to build up. Let all work together actively, pluckily, honestly, with but one end in view—the advancement of our State and section. You are now in sight of that for which you have been so long struggling.”

In addition to reporting the remarks of Dr. Sexton, the first issue of The Herald published the following claim: “Coal and iron are found in happy union of finest sort and inexhaustible quantity in well-nigh the same field. This is true of but few places [on Earth]. God hath joined them together, and out of the heaven-born union Farmville push and Farmville pluck will make a Farmville of the future which will be the pride of all its people, an honor to Virginia, and a glory of the New South.” This is probably why “Coal and Iron” rather than just “Coal” is part of the company name, even though it was generally conceded that Buckingham had most of the iron deposits and Cumberland had the lion’s share of coal.

NB: The City of Fort Payne, Ala., and the Town of Farmville, Va. have so much in common that they could be sister cities. In 1872, Farmville became the county seat of Prince Edward County. In 1878 Fort Payne became the county seat of DeKalb County. Each had a depot, an opera house, a first-class hotel and a “Trail of Tears.” Fort Payne’s Trail of Tears occurred in 1838, when the Cherokee Indians were evacuated to Oklahoma by forced march.

Farmville’s Trail of Tears occurred in 1865, when Lee retreated to Appomattox by forced march through Farmville. Beyond that, each had a “Coal & Iron Company,” which brought about a boom that was ended by the Panic of 1893. The main difference was that the coal and iron deposits in Ft. Payne were pretty much played out by 1891, when Farmville’s were  just beginning to be worked. More importantly, Ft. Payne owes the city it has become to the brief existence of its coal and iron company, and so too, albeit to a lesser extent, does Farmville.

Ft. Payne did not have a tobacco industry to fall back on, so she was forced to create what Farmville always wanted—a manufacturing industry. Starting with a population of less than 500 in 1887, Ft. Payne has grown to almost 15,000 citizens. Farmville has grown from a population of about 2,700 in 1887 to about 8,000 today. The modern highway distance from Farmville to Ft. Payne is 521 miles, but the railroad distance in 1890 was probably greater than that. (For comparison, the population of the Farmville District of Prince Edward County was given as 4,202 by the 1919 Almanac of The Farmville Herald.) 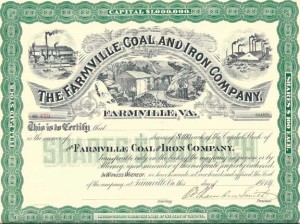 JIMMY HURT
This unexecuted stock certificate (no. 459) for the “The Farmville Coal And Iron Company,” is available on eBay for $29.95. It is signed by “Ed. Chambers Smith,” a famous Southern attorney and judge, who succeeded Julian S. Carr as president in January 1891. 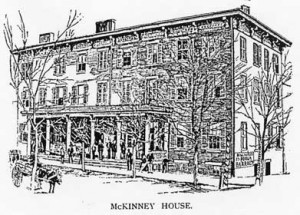 Woodcut (1890) of the Randolph House, renamed McKinney House to honor Farmville’s own Phillip W. McKinney (1832-1899) when he was elected governor. It is interesting to note that it was run by the governor’s brother, Robert J. McKinney (1838-1906). Another brother, Samuel B. McKinney (1833-1896), Farmville dry-goods merchant, was on the board of directors of the Farmville Coal & Iron Company. All three brothers are buried in Westview Cemetery.

By Victoria Walker Special to The Farmville Herald The Town of Farmville has become a little safer for pedestrians. Two... read more