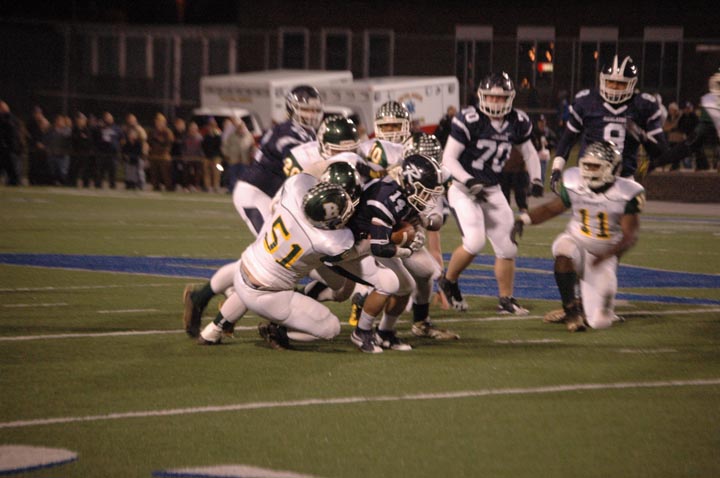 Harley Gough (51) tackles a Richlands player with the help of a few of his teammates.

Despite Buckingham’s domination of the first half with two touchdowns by Leon Ragland and a fumble return by Brycen Newby, the host Richlands Blue Tornado stormed back in the second half to take a 35-20 win Friday night over the Knights, ending Buckingham’s playoff journey.

The Richlands improve to 11-1 and advance to the third round of the VHSL Region 2A West playoffs. They will play at Appomattox, the only other team to beat Buckingham this season, at 3 p.m. Saturday.

“We knew they were going to be good, and I wish we could have met them down the line a little bit,” said Buckingham head football coach Craig Gill. “There were a couple of calls I can’t talk about that we didn’t get. I feel like they took eight points from us. But that’s football.” 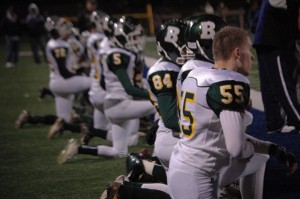 The Knights take a knee while an injured player is down on the field.

Gough notched 192 carries for 1,478 yards and six touchdowns on the season. He also went 25-for-51 in passing for 471 yards, six touchdowns and a two-point conversion. Gough led in season tackles, as well, with a total of 64. Newby finished the season with 34.5 tackles, 6.5 tackles for a loss and a sack. 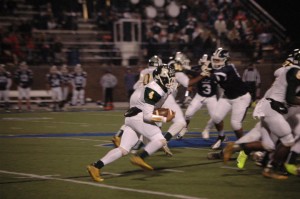 B.J. Gough carries the ball during the Knights’ second-round playoff game against Richlands.

“We will get through this,” said Gill. “I am proud of these boys. There has only been three other (varsity football) teams from Buckingham to win 10 games in a year.” 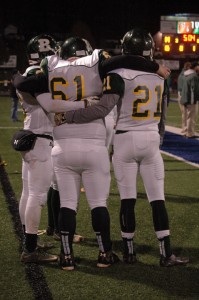 The Knights lose 13 seniors, who “provided great leadership during the year and are going to be hard to replace,” Gill said. “I just hate that it ended this way for them. That is the only thing about the playoffs: If you don’t win it all, you end on a bad note. I have had nightmares over that.”

A James River District championship was the highlight of a season that saw the Knights lose their season opener to Appomattox, then reel off 10 straight wins.

“I am proud of the district championship, and the way they came out here and played hard,” Gill said. “We will regroup and try to start building for next year. We got something to build on here.”

Gill, who just began treatments for cancer that has returned, said his players and football have encouraged him to keep going. 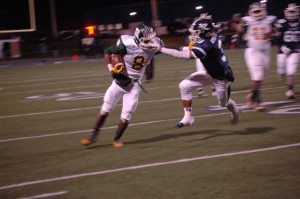 Leon Ragland fights off a Richlands player before driving the ball into the Knights’ end zone.

“Just being with the boys today gave me strength. Being around them any day gives me a lot of strength. It gives me a hope and something to drive me to get better,” he said. “Their heart inspires me. No matter how bad I feel by myself, I feel worse for them. I wish I could take their pain, because they put so much into this (football and playoff season). But we will be back. We gave Buckingham something to be proud of, and they can’t take that away from us.”