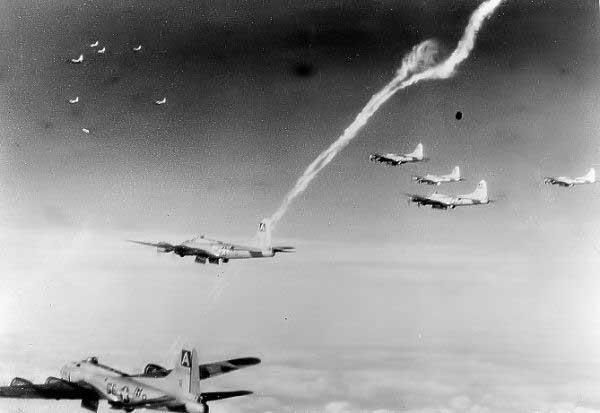 Oct. 7, 1944 would be the last day that George Bruce Williams, of Prince Edward, would ever fly his B17 bomber through the sky. About 12 minutes before reaching his target — an oil refinery in Bohlen, Germany — he was shot down. Pictured are B17s from his squadron.

“The need today for just what you have is desperately real … Your academic training plus your Christian faith makes you well-fitted for the dangers of this hour. Never was this type of leadership in greater demand … In spite of the conditions which you face today, we send you forth with the firm belief that you will give your best.”

H-SC President Edgar G. Gammon to the Class of 1944

The Japanese attack on Pearl Harbor on Dec. 7, 1941 sent shockwaves through the nation, leading millions of young men and women across the country to enlist into service.

Raeburn Francis Gordon, Class of 1937, was born April 12, 1916 in Fulton County, Indiana but had extensive family connections in Rochester, N.Y., the home area of his parents, Hayden and Grace Collins Gordon. They moved to Farmville in 1922 when Ray was about 6. His formative years were spent in Farmville though he visited family in Rochester during several summer months. For all practical purposes, he was one of Prince Edward’s “hometown boys.”

As a young man he was an “ardent plane

enthusiast” and reportedly had flown from Farmville to Rochester to visit family on many occasions. He entered Hampden-Sydney as a freshman in 1934 and, following a rigorous series of examinations, achieved honor roll status. He soon transferred to the University of Virginia where he was a “distinguished student” and from which he graduated in 1938.

The 25-year-old enlisted in the U.S. Air Corps as an Aviation Cadet in Oct. 1941 and entered service on Dec. 19 — just 12 days after Pearl Harbor. He had been stationed at Maxwell Field and Gunter Field, Ala., at Arcadia, Fla. and at Columbus, Miss. He was at the latter when killed during flight training.

His twin-engine training plane collided with another airplane on July 1, 1942. According to an Army Air Corps news release, Gordon and another cadet were occupants in the training plane and were “either killed in the collision or were unable to bail out before the plane crashed.”

The occupants of the other plane were able to parachute to safety. Gordon had been in the Army Air Corps for nine months. His death was reported in the Record of the Hampden-Sydney Alumni Association which began with the sentence, “The sad news of alumni casualties in this dreadful war has begun to come in. …” Many more names would follow.

Gordon was the first casualty of the war from Farmville. The Farmville Recreation Defense Center was dedicated on Oct. 16, 1942 in his name, with a reading room furnished by his parents. The memorial reading room contained easy chairs, lounges, reading lamps and writing tables. Books for this room were provided by the woman’s club. It was reported that, “The bereaved parents hope to contribute to the comfort of the sons of others.”

On March 10, 1944, a newly organized chapter of American War Dads in Farmville adopted the name of the Ray Gordon Chapter American War Dads. According to the public report, “He was the first of the young men of Farmville … to give his life in defense of his country in World War II.”

The purpose of the organization was focused on providing full reemployment to returning service men. It was reported, “The name of this chapter indicates the desire of the members to honor the name and to cherish the memory of their brace and popular fellow townsman.”

Gordon was not an isolated case. A significant number of men were killed in what were classified as “non-battle deaths.” These were sometimes training accidents and other times operational accidents. Regardless of the circumstances, they gave their lives while serving their country.

George Bruce Williams was a unique member of the Class of 1944 in that he was partially raised at Hampden Sydney. He was the youngest son of Dr. W. Twyman Williams, pastor of the church at Hampden Sydney. In more ways than one, this was his home. 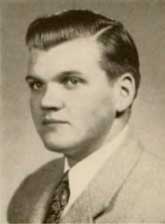 He was received in the church at 11 years of age. He entered Hampden-Sydney College and became a brother in the Chi Pi fraternity, served as president of the student finance board and on the business staff of the Garnet and the Kaleidoscope, the college’s literary magazine. He was also a member of Pi Delta Epsilon, a journalism honor society.

While a junior in college, he was called to duty enlisting in the Army Air Force. In all stages of flight training he maintained a “superior” rating, the highest given. Commissioned a 2nd Lieutenant in March 1944, he was sent to bombers.

While flying a B-17 in the late summer of 1944 he had occasion to come near here and made an “air visit” home, passing over the college. It may very well have been his last to Hampden Sydney.

He deployed to England shortly thereafter to begin combat missions as part of the 331st Bomb Squadron, 94th Bombardment Group, in the U.S. 8th Air Force.

Oct. 7 would be the day of Williams’ second combat mission. The target of the 86-plane B-17 bomber force was the oil refinery at Bohlen. Approximately 12 minutes before reaching the initial point where they begin the bomb run, overwhelming numbers of enemy aircraft attacked Williams’ group. His squadron took the brunt of the attacks of over 60 German fighters. Though friendly fighters were present there were not enough to provide adequate protections for the bombers.

According to official reports, “[Williams’] aircraft was last seen going down in the vicinity of the [initial point]. Due to the extreme battle conditions prevailing, no further observations were made and no further information regarding this crew is known.”

Williams’ plane went down about 12:15 p.m. and crashed near the German village of Wiehe. German documents indicate the airplane caught on fire, exploded in the air and was 98 percent destroyed. Sergeant George Perrin was the only member of the crew to survive. He later wrote of young Williams, “He was a grand pilot and I loved him.”

Williams was a Hampden-Sydney man. He was remembered at Hampden-Sydney College in a special memorial service held in the College Church on Feb. 17, 1946.

Robert Dunn McIlwaine of the Class of 1944 was killed in action in the Pacific on June 12, 1944.  He was a naval aviator assigned to Fighter Squadron 51, Air Group 51 on the aircraft carrier USS San Jacinto. 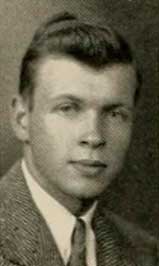 Robert was raised at Hampden-Sydney College. His father was the Rev. William Baird McIlwaine Jr., Class of 1905. His grandfather was the Hon. William B. McIlwaine, Class of 1873 and his great-uncle was the Rev. Richard McIlwaine, DD, LLD, a distinguished president of Hampden-Sydney College. Robert enlisted in May 1942 earning pilot wings and a commission in the Navy.

During the Marianas Campaign and the battle for Saipan in an attack on a Japanese ammunition point, it was reported the ship’s bomber and fighter pilots were ordered to “man their planes and attack an ammunition dump on Aslito Field on Saipan. Ensign McIlwaine’s plane was among the first to go in. The Japanese anti-aircraft fire was intense; the plane was hit, probably by a five-inch shell and exploded in the air. A careful search revealed no trace of plane wreckage or the crew.

According to the USS San Jacinto’s history, “Though we had previously suffered operational losses, our first combat loss came on 12 June, when Ensign R.D. McIlwaine’s Hellcat Fighter was shot down by anti-aircraft fire and crashed before the pilot could get clear. Impressive and solemn memorial services were held aboard ship the next day … So far as is known, Ensign McIlwane was the first American pilot to lose his life on Saipan and in the Marianas Campaign.”  He was awarded an Air Medal posthumously for his heroism. 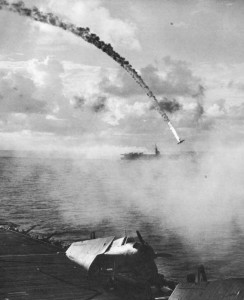 Hellcat Fighter pilot Robert McIlwaine was one of the first Americans shot down by anti-aircraft fire during the battle for Saipan in the Marianas Campaign in Japan. This photograph was taken during the skirmish.

McIlwaine’s squadron commander was quoted as saying, “He was a fine man.”

The Prince Edward County men of Hampden-Sydney College sacrificed their lives in the service of their country. They were not the first, nor were they the last. It can safely be inferred that their experiences at Hampden-Sydney College helped develop their character and their sense of duty, where it is sometimes said, “Honor lives and tradition never dies.”