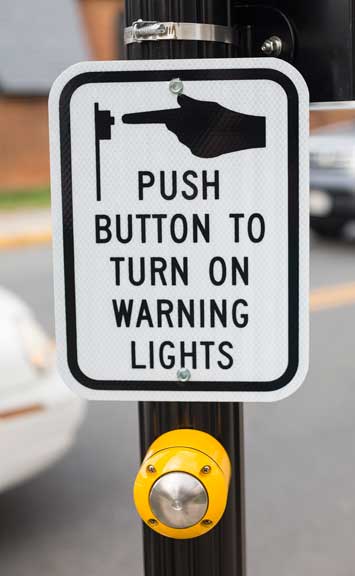 One of the new crosswalks with flashing lights is located at High Street between Grainger and Lancaster halls on the north end of Longwood’s main campus. Carson Reeher | The Rotunda

The Town of Farmville has become a little safer for pedestrians.

The new tool provides the option of pressing a button that enables flashing lights to be seen by oncoming drivers so they may yield to individuals walking across the street.

“We just felt we needed to upgrade those pedestrian crosswalks, we didn’t feel that they were well lit, and we were trying to make sure they were as safe as possible,” Farmville Town Manager Gerald Spates said.

According to Spates installing the signs was a joint effort between the Town of Farmville and Longwood University’s facilities management department. “Longwood agreed to pay half of the cost of purchase in the signals, but we installed them,” said Spates.

The sign equipment was purchased from Traffic & Parking Control Co., Inc. (TAPCO), and cost roughly $8,500 per sign according to Spates. He said they went up relatively fast since the town employees installed them.

“The reason we thought the button would be better is to make the students know they have to do something before they cross the street,” said Spates. “A lot of times you’ll watch the students, and not just students but professors too, they’ll hit the intersection, keep on going and expect a car to stop, and that’s not how it works.”

Students at Longwood are thankful for the town’s efforts in making it a more pedestrian-friendly town, although some are hopeful that efforts will not end with the two signs.

“As someone with experience in pedestrian/driver issues in Farmville, the crosswalks were not as efficient as they are now with the flashing lights,” said Longwood University senior Andrea Miller. “This is a really good tool. I just think we need to make sure that the people are using them to the advantage that they are there for.”

According to Spates the town intends on continuing to add flashing signs around town, and they welcome community feedback to make Farmville a more pedestrian-friendly environment.

“I was crossing the street by Curry and Frazer, and the woman driving wasn’t paying attention and she gunned it when I started walking. She slammed on the brakes in time, but she still bumped my leg with her car,” said Becky Shearer, a senior at Longwood University. “I wish the intersection near Curry and Frazer was similar to the four way at High Street and Oak Street where it would stop all traffic.”

According to Spates the signs were put in place to create a safer environment but some people aren’t utilizing this new tool.

“We sat there the other day, and one in 40 used the button,” said Spates. “So now we’re looking at a motion-activated sign.”

There is discussion about adding more pedestrian signs with flashing lights before the end of the year, he said.

“We’ll probably put some more up on Griffin Blvd. and places like that … there are two places on Griffin I want to put them,” said Spates.

The town is currently looking at prices for a motion-activated pedestrian sign and is considering testing it out on the next intersection they choose to install a sign.

FARMVILLE — The Farmville Jaycees have announced that the Prince Edward Volunteer Rescue Squad (PEVRS) will serve as the grand marshal... read more