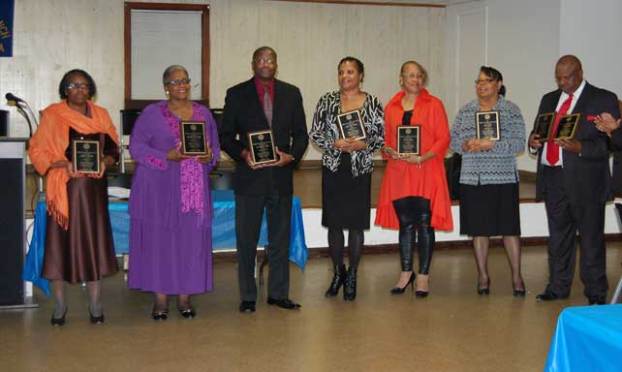 Depte, Hairston, and White were not present. Washington and Samuel O. Reid have passed away. The honors were bestowed to the 10 during the NAACP’s King and Queen Pageant and Freedom Fund Banquet at the Bright Hope Center in Cumberland.

Cumberland Commonwealth’s Attorney Patricia Scales served as the keynote speaker for the event. “1965 was a turbulent time for our nation,” Scales said. “I don’t blame anyone for the way it was then — some people say ‘It is what it is.’ But no child is born with hatred in his heart.”

She said what was most important to her was “that this country was able to reexamine what was going on and decided that desegregation had to end and it did end. We moved on and became a better society.”

Scales said that in the midst of all of the violence and civil unrest during the 1960s, in the fall of 1965 the decision was made that a small group of black students would leave Luther P. Jackson High School and enroll in the all-white Cumberland High School.

She also spoke of dark events of the time, such as the, New York Riots, the destructive six-day Watts Riots and the violent attack of protesters on the Selma Bridge crossing into Montgomery, Ala.

Scales said that while the 10 young students were scared and unsure, they were immensely courageous. She commended the parents of the group for “having the fortitude to send their children into the unknown.”

Rev. Jones, one of the ten students, now serves as pastor of Sharon Baptist Church in Cumberland.

“I remember that I was scared, but I had to do what my parents told me to do,” he said.

“I think it may have been a little harder for my sister, she was behind me by a couple of grades. It was not easy, but in the end, you know, we made it okay.”

Undeterred by a damp and dreary day, 94-year-old Aubrey Holman smiles as he accepts a box of home-delivered meals from... read more