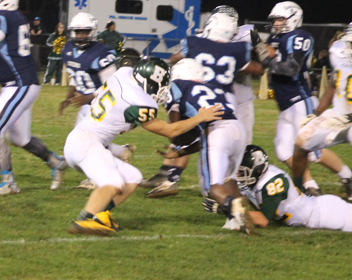 The Buckingham Knights earned their eighth straight win after defeating the Randolph-Henry Statesmen 55-13 on Friday night.

With the win the Knights improved to 8-1, only having lost their first game to Appomattox. Buckingham continues to hold the No. 5 spot in the VHSL 2A West region standings.

Leon Ragland began the fast-paced game by scoring all five of the Knights’ touchdowns in the first half. He scored on 3-, 6-, 4-, 38- and 4-yard runs.

All five touchdowns were followed by successful extra points by Zach Baird.

The second half saw Buckingham slow down, but not by much, as the team still scored three touchdowns during the half.

Ragland led the Knights with 14 carries for 107 yards that accompanied his five touchdowns, while Gough had eight carries for 102 yards and a touchdown. He also went 3-for-6 in passing for 39 yards.

Gough also finished the night as the Knights’ key defender with nine tackles. Michael Mabry had 6.5 tackles, Brycen Newby had 5.5 tackles and Patrick Carr and Liggins had four apiece.

“Defense did a great job and we were able to contain (Statesman quarterback) Joseph Reed,” said Buckingham varsity football coach Craig Gill. “We played well and we just want to keep getting better so we can hopefully host a playoff game. We can do it; we just have to not get lazy.”

The Knights will finish their regular-season schedule on Friday when they host the Prince Edward County High School Eagles at 7 p.m.

Only two games are left in the regular season for each area team, and as one can imagine all teams... read more