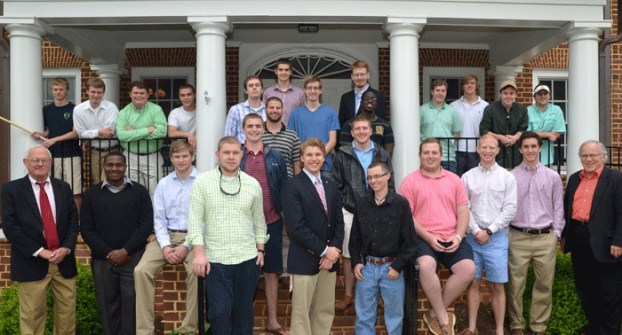 Freshmen at Hampden-Sydney College are taking early measures to be the future leaders of tomorrow through the Wilson Center’s Freshman Leadership Program.

According to its website, the Freshman Leadership Program provides first-year students the opportunity to explore the many facets of leadership. The program includes a two-day practical exploration of leadership before orientation and formal meetings twice a semester. Students also meet informally throughout the semester.

“I proposed the program to insure that incoming freshmen who selected H-SC because they heard that we emphasized leadership preparation, would have an opportunity to strengthen their leadership skills,” said Dr. David Marion, founder of the program.

Marion said before the freshman leadership program was developed, previous opportunities existed only for upperclassmen interested in civic education and leadership training.

“It is the only program that serves freshmen, giving them a head start to pursue active leadership roles in their subsequent years,” said Curt Smith, director of the Freshman Leadership Program.

H-SC men are also given the opportunity to interact with notable alumni, complete the Myers-Briggs personality test and compete in an organizational simulation.

Student Matthew Mood ‘19 said that being a member of the Freshman Leadership Program has allowed him to grow through the vast amount of activities offered.

“Since arriving to Hampden-Sydney, I have been able to see the development of my leadership skills through the Freshman Leadership Program that I had the opportunity to participate in,” Mood said.

He said the program has afforded him the opportunity to work with like-minded students and attend seminars and programs hosted by alumni.

“This program has already shown fruitfulness during my time on campus,” said Mood. “I have already been inspired to take active leadership roles on campus such as the position of vice president of service projects in Circle K International. In this position, I have been given the opportunity to display the leadership skills that I have learned in the Wilson Center.”

Smith said many of the freshmen that participate in the leadership program become residential advisors (RAs), serve in student senate or on the school’s honor court.

According to Marion, each year a group of 24 freshmen make the commitment to participate in the freshman leadership program. This group of freshmen attends the two-day orientation leadership seminar. About a dozen are added at the end of September.

“The workshops are first-rate and feature presentations by persons who are consultants for major organizations such as the Federal Executive Institute and the U.S. Marine Corps University at Quantico,” Marion said.

“Thanks to the Wilson Center, I am growing as an individual and as a Hampden-Sydney man,” Mood said.