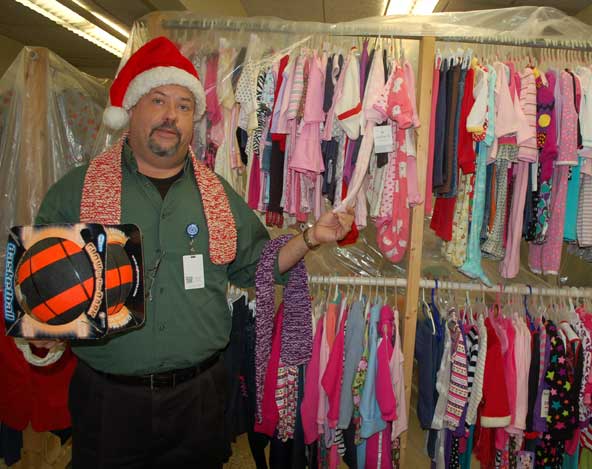 Barry Vassar, who’s serving in his second year as the Cumberland Christmas Mother, poses with items set for giveaway next month.

Christmas Mother prepares for the holidays

Barry Vassar wants the Cumberland Christmas Mother program to go above and beyond the smiles it placed on the 344 children who received clothes and books last year right before Christmas and the joy over 145 families received.

Vassar — the Cumberland Christmas Mother for the second year now — can only fulfill his goal of serving more children and seniors with the support of the community.

“I got involved in the Cumberland County Christmas Mother in 2013 when Alice Metts, who’d been there for 12 years or thereabouts [retired],” he said.

Vassar, a Cumberland resident who works for the county’s department of social services, knows what it takes to deal with kids.

“My job is to prevent kids from coming into foster care,” he said. He’s been on the job for three years now.

“They thought it would be great if I was Christmas Mother,” he said. “And we don’t change the name to Christmas Father,” he laughed. “So I kind of stepped in mid-year last year.”

The program operates year-round, [and doesn’t start] right before and ending shortly after Christmas. During the year, the volunteers that operate the program purchase books, shop for clothing, pass out donation collection jars, send out donation letters and place applications in conspicuous places throughout the community.

“Basically everybody who applies who qualifies for [the program], we approve them. If anybody doesn’t qualify for it but they have some extenuating circumstances there are several churches that will adopt families,” Vassar said.

This year, the pickup location for the program will be at Cumberland Social Services on Dec. 11 and 15.

“We make it work,” he said, referencing the many volunteers that work to make the operation a success. “All of the women on the committee get all the work done,” he said.

Vassar said he has discretionary approval over some decisions for assistance.

“I absolutely love it,” he said. “I have kids from last year that see me in Walmart and Dollar General. They want to know where my Santa hat is,” he said.

“It’s really about … letting the kids of the community know that somebody, even outside of mom or dad, care about you. You’re part of a bigger community and that community cares about you.”

Seniors age 60 and above that meet certain guidelines receive Christmas bags, which includes food and useful household items, according to Valerie Gray, who works in the senior adult services division of Cumberland Social Services.

Gray, who’s been involved in the program for about 10 years, said the program yields about 90-100 bags for the elderly.

“I really enjoy doing this,” she said. “The seniors are very appreciative.”

“We do a community senior adult luncheon. This year it’s Dec. 10 at Payne Memorial Church. It’s entirely free for the seniors of the community,” Vassar said.

Last year, the organization provided 92 gift bags for the elderly. “Those were mostly the seniors that are shut-ins, that may not receive any other resources,” he said.

“We would love to be able to serve more,” Vassar said. “Part of it is funding and part of it is based on donations that come in. We only take new gifts, new clothing, new toys, whatever it may be.”

The program is currently in need of boys and girls jeans for ages 7 to 10, as well as coloring books.

The Christmas Mother’s headquarters is full of toys, clothes, books and other items waiting to reach the arms of children this winter. The Heart Stitchers, of Cartersville, recently donated a large supply of handmade scarves, caps and other items. Cumberland Presbyterian Church is planning on sewing jumper dresses for the girls.

“We are asking local businesses to make a donation … and we will purchase and make a sign to go on our Christmas Mother float saying ‘proudly sponsored by and whatever that business name is,’” he said.

Vassar said that Bear Creek Academy and Centra Southside Community hospital have also aided in their efforts with logistics and offerings to seniors, respectively.

Individuals and business that want to donate new items, money or time should contact Vassar at (804) 492-4915. Gifts and donations are tax-deductible, he said.