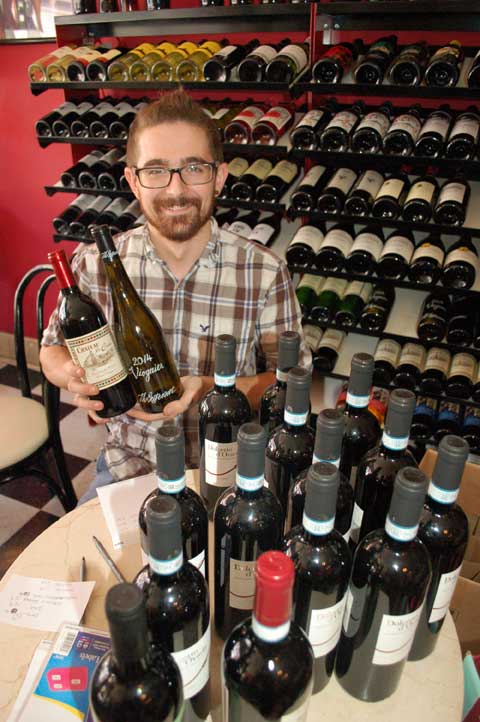 JORDAN MILES | HERALD Mackenzie Lenhart, an employee of The Bakery in downtown Farmville, displays some of the numerous Virginia wines the business offers.

In what was once the Heart of Virginia tobacco country, it would appear that the grapevine has firmly taken root. Virginia wine is quickly becoming the toast of wine aficionados the world over.

Statewide, Virginia is home to more than 250 wineries and is fifth in the nation for wine grape production.

The wine industry is also a significant tourist draw to Virginia, with approximately 1.6 million people visiting Virginia wineries as of 2010.

Gov. Terry McAuliffe even hailed the explosive growth of the Virginia wine industry in a speech recently.
“I’m pleased to see continued sales growth for our wines and ciders in Virginia, which means more jobs and revenue across the Commonwealth, especially in our rural areas where most of our wineries and cideries are located,” said McAuliffe.

“This growth is especially heartening as Virginia wineries are increasing vineyard plantings to meet increased demand for our wines.”

It’s a trend that has been noticed by Synthia Starkey, owner of The Bakery in Farmville, which is known for both its wine bar and for hosting wine tastings where they’ll pair off a Virginia wine against various imported wines.

“They can vary tremendously in quality and there are some issues with distribution,” said Starkey.

“Part of what makes Virginia wines unique though is most come from small vineyards and that it’s such a new industry here.”

Nobody is happier or prouder than a number of local wineries such as Annefield Vineyards in Charlotte County, which have done their part to put the industry and the region on the map.

“Most of the wineries here have been established in the last 10 years,” said Stephen Ballard, one of the owners of Annefield Vineyards.

“It has been an interesting business, at times a difficult one, but it’s always a rewarding one.”

Winemaking has a long history in Virginia, dating as far back as Thomas Jefferson’s early attempts to grow wine grapes at Monticello starting in 1771, envisioning his home state as the heartland of wine production in the New World.

Jefferson would fail in his attempts with the vines he planted not yielding a single harvest of grapes or resulting in a single bottle of wine, but in the two centuries since then, Virginia winemakers would vindicate his vision.

“A lot of Virginia wineries — especially regionally — began as tobacco farms,” said Cameron Anctil, director of the Southern Virginia Wine Trail. “Starting in the 1970s, as that industry declined, a lot of farmers began looking for a new product, and they found one in wine grapes.”

Annefield Vineyards is one such winery. Originally a tobacco and dairy farm, before being converted to a winery in 2005, many of the same soil and weather conditions that made Central and Southern Virginia prime tobacco country also made it well-suited for wine production.

Ballard credits three factors specifically: the drier climate, the longer growing season and the soil of the “Carolina Slate Belt,” which runs from Georgia to just west of Farmville.

“Our growing conditions make for superior fruit,” said Ballard. “The soil makes available more calcium than others, which we makes for a stronger vine.”

The fruits of their labor speak for themselves. Annefield’s 2013 Viognier was named Best in Show at the State Fair of Virginia last year, while their 2014 Vidal Blanc won gold at the San Francisco International Wine Competition, to name two recent standouts.

Anctil and Ballard are both quick to point out that for Southern Virginia, the potential for growth is tremendous.

“With other winemaking regions, one or two types of wine dominate,” said Anctil. “Regionally on the other hand, one of our biggest selling points is the wide variety of wines produced here.”

The biggest selling point though has been a combination of world-class wine and Southern hospitality.

“We are not densely populated with wineries or people, and it’s definitely more relaxed than other regions,” said Ballard.

“Most of the wineries are pretty small, which makes for a more personal tasting experience, almost always with the owners.”

Slow down and watch for deer

Autumn is here, and along with colorful leaves, crisp air and shorter days, it means Virginia’s white-tailed deer are on... read more