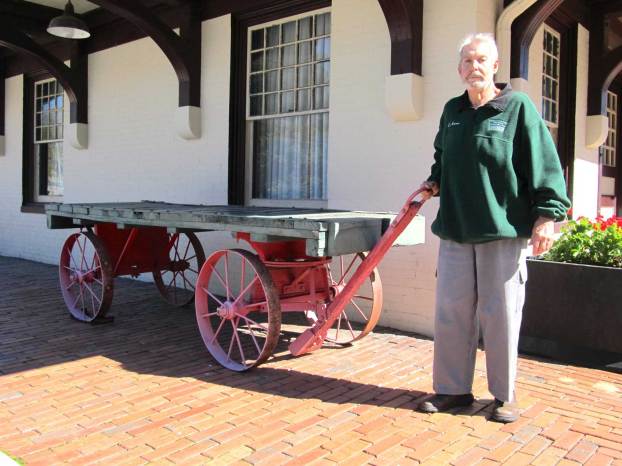 Dr. Jordan knows why this baggage wagon is chained to the Farmville Depot. With Halloween approaching he advises, “Be aware!”

The tale of Longwood’s ghostly bell and baggage wagon

It is nearly Halloween and time for a scary story!

Once upon a time, a long, long time ago, a very frightening event happened in Farmville.  It all began so innocently with a bell and wagon and the Farmville train depot.

The year was 1896, and in towns like Farmville bells were an important part of daily life.  The peal of bells woke people up in the morning, called them to church or school, signaled the end of the day and rang in alarm at fires and other disasters.  In a true sense, the town bell was the heartbeat of the community.

In 1896 a new bell was coming to Farmville – the Farmville Normal School for Women (now Longwood University) was getting its own bell that would hang on the roof of the Rotunda, high up on High Street, and be heard all over town. The bell was coming in on the railroad from Northville, Michigan, where it had been cast by the renowned bell founder Charles Van Valkenburg. He had 51 years of experience with big bells — and the new bell was a big one at 1,027 pounds.

The big bell arrived at the Farmville Depot in a freight car.  Freight in boxes or baskets or on pallets or canvas bags was unloaded onto a device called a baggage wagon (like the one in the photograph).  The baggage wagon had a handle for pulling (it was usually pulled by people, not draft animals) and a brake to slow it going down a hill. And it was this wagon that created our ghostly tale (today the wagon is chained to the wall of the train depot so it cannot be the cause of any more harm).

It really wasn’t the wagon’s fault that the awful thing happened.  The fault was that of the stepping stones on High Street. In 1898 a series of white stones crossed High Street that was not paved yet. The street was a muddy mess in winter, and it was dusty and rutted in summer. The stepping stones were placed there by the town so the long white dresses of young college ladies would not get dirty as they crossed the street. The spaces between the stones allowed the wheels of wagons going up and down High Street to straddle the stones.

Here is what happened that day.  The young ladies, anxious to have their bell, volunteered to pull the baggage wagon with the massive bell sitting on it from the train depot to campus. The girls were unskilled at performing such labor, and when reached they reached the stepping stones the wheels caught the stones instead of straddling them. The wagon tipped, the bell slid and the ladies ran — except one who twisted her ankle and fell.  The huge bell crashed directly onto her pinning her to the ground.  A doctor was summoned, but she never breathed again — crushed by the bell.

If it had ended there, the tale would be horrible enough. But it doesn’t end there. The luckless lass was buried in Westview Cemetery, and the bell was cleansed and hoisted to the cupola on top of the Rotunda where it performed its duties until taken down in 1976. Until it was silenced the bell pealed regularly day and night from 1896 to 1976.

Well not exactly regularly.  Here is the scary part of the tale. Many people over the years, both townsfolk and students at the college, swear they have heard the bell tolling the hour and, unpredictably once in a while, the bell would “skip a peal.” Like the skipping of a heartbeat, I guess. The belief has arisen and is widely held that those missed peals are ghostly moments of silence, a silence that reminds us of that fatal ringing of the bell as it slid off the wagon and crushed an unfortunate Normal School girl.

That bell, like the baggage wagon at the depot, is still with us — it hangs from a stand in the Longwood Library where you may see and touch it today.  It is rung only on ceremonial occasions such as senior graduation each May.  But if you should ever hear its ancient voice speak, count the peals to be certain it doesn’t “skip a beat” — that missed beat could be for the girl of a century ago. Or it could be for someone else — perhaps you!