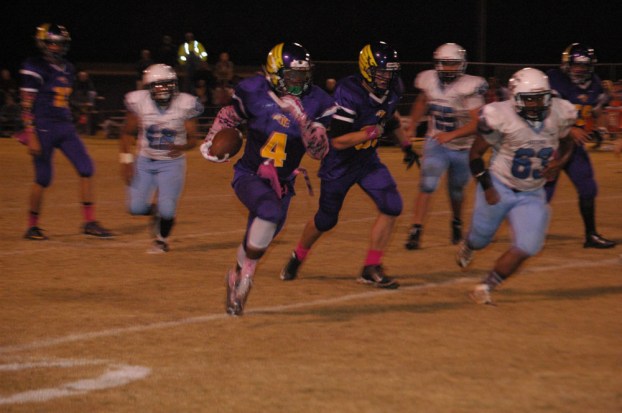 Prince Edward’s Delquan Bigelow rushes down the field for a touchdown during the Eagles’ varsity football game against Randolph-Henry.

The Eagles hoped that tying the game 34-34 early in the fourth quarter would get their team back in the game. However, the Statesmen answered with three touchdowns and a two-point conversion that ended the game in R-H’s favor.

“We played well, but had trouble containing Joseph Reed, and they were able to capitalize,” said Prince Edward varsity football coach James Ford. “We wore down at the end of the game and just did not finish the job. It’s a tough loss to take, but we will have to regroup and get ready for Goochland on Monday.”

Prince Edward began the game strong and led 28-14 at halftime. However, Reed’s second-half performance shut down the Eagles’ chances of maintaining that lead.

Khalil Smith had two receptions for 46 yards and a 19-yard touchdown reception. Joel Thomas went 7-for-20 in passing for 107 yards, had an interception and scored a touchdown.

K’Nyron Cordell followed with eight carries for 32 yards, while Tray Scott had two receptions for 21 yards and Bryan Moses had a reception for 19 yards.

Dennis Dubose had a two-point conversion.

Now that the regular season is two games shy of being done, Prince Edward still has a chance to make the 2A East Region playoffs.

“As far as playoff play (goes), we are just taking it one game at a time. We are sitting at 18th and control our own destiny, but we have to take care of business,” Ford said.

Prince Edward is only above Nandua and Bluestone in the 2A East Region standings. The Eagles will have to defeat their final two opponents to have a shot at making the playoffs.

The Eagles will host Goochland High School on Monday at 7 p.m. Goochland stands at No. 3 in the 2A East standings and will be a tough opponent to defeat, as they have a 5-2 record this season.

Prince Edward will finish its regular season on Friday, Nov. 6, when it travels to Buckingham County High School for a 7 p.m. James River District matchup.

After a bye last Friday, Buckingham is fifth in the 2A West Region standings.

Prince Edward County High School golfer Henry Lutz has been making noise on the course as he won the Blue... read more