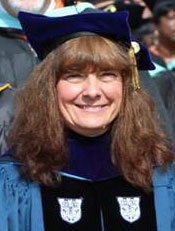 Dalton grew up on a 150-acre family farm in Lunenburg County.  She earned her B.S. and M.S. degrees from Virginia Tech in Agricultural Economics and her Ph.D from Duke University in Economics. She has served the last five years as professor and program director of the agribusiness program at Southside Virginia Community College.  She and her husband, Johnny, own a small cow-calf herd in Kenbridge and have a hunting supply business.

Prior to coming home to Southside in the fall of 2010 to give leadership to the new agribusiness program, she spent 17 years in her teaching and extension position in Virginia Tech’s Department of Agricultural and Applied Economics.  In 2003, the university awarded her its Alumni Award for Excellence in Teaching and its Alumni Award for Excellence in Advising. At the state level, she has received the Virginia Agribusiness Council’s Special Recognition of an Individual Award, Virginia Farm Bureau’s Service to Agriculture Award and the Virginia Cooperative Council’s Cooperative Education Leadership Award.  At the national level, she has received teaching awards from the North American Colleges and Teachers of Agriculture Association and the Agricultural and Applied Economics Association.  She has published numerous journal and popular press articles and has made hundreds of presentations around the state and nation, as well as in the United Kingdom, Spain, Canada and South Africa.  In March 2015, she was selected as Virginia Farm Bureau’s Lady Leader, Proudly Promoting Agriculture.

In their spare time, Dixie and Johnny enjoy playing and watching sports.  They both travel extensively throughout Virginia and North Carolina to play competitive slowpitch softball and have competed in the softball World Series in Orlando (Fla.), Phoenix (Az.), and Las Vegas (Nev.). Her two sons, Kyle and Jacob, are recent SVCC Governor’s School graduates.

Dixie is the daughter of Albert and T.J. Watts, of Keysville and the niece of former SVCC business instructor, Barbara “Polly” Beard.

The Cumberland County Public Schools Foundation raised over $4,000 during its annual Walk for Education held Oct. 9 at the... read more