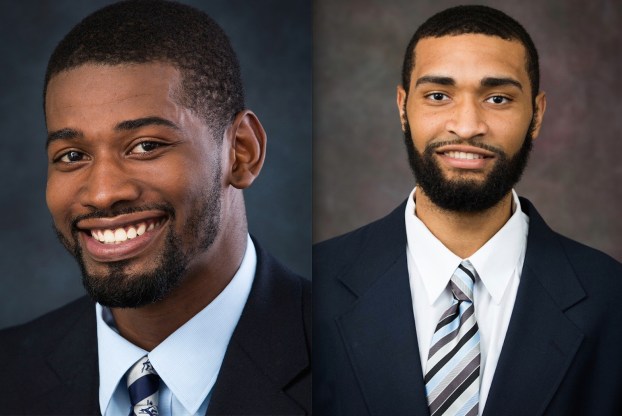 According to Longwood Athletics spokesman Chris Cook, Shaquille Johnson, left, and Jason Pimentel, right, have been suspended from the men's basketball team.

Two Longwood University men’s basketball seniors, including one who was found innocent last week of an assault charge, have been indefinitely suspended from the team after being charged with marijuana possession.

“Shaquille and Jason have not met the standards Longwood expects from its student-athletes,” said Troy Austin, Longwood’s director of athletics.

“They will be removed from team activities while we review this matter.”

The latest incident is neither player’s first brush with the law.

Johnson was charged with malicious wounding of a Hampden-Sydney College student in August 2014, but prosecutors dropped the charge last October when the alleged victim was not present for a hearing.

Prior to his time at Longwood, Johnson played for Auburn University, where he was dismissed from the team as a sophomore guard in July 2013 following an arrest for second-degree possession of marijuana, according to the Opelika-Auburn News.

Pimentel was charged with sexual battery in November and was found guilty of the charge in February, but he was exonerated last week after he appealed the incident in circuit court. The charge was reduced to assault and battery by Prince Edward Commonwealth’s Attorney James Ennis last week before Pimentel was found innocent.

Pimentel was dismissed from the Old Dominion University’s men’s basketball team in September 2012. According to The Virginian-Pilot, Pimentel was not invited back to the team after one season as a reserve forward. ODU’s coach at the time, Blaine Taylor, cited no particular incident for the player not returning. Instead, “… it was just kind of a cumulative thing.”

Last season, Johnson started 31 out of 33 games for Longwood and averaged 13.6 points per game. He was named to the Big South All-Tournament team and named the No. 4 dunker in college basketball by CollegeBasketballTalk on NBCSports.com.

Pimentel played in Longwood’s last eight games of the season after being reinstated to the team, following his 25-game suspension that resulted from his arrest incident. He averaged 4.6 points and 4.4 rebounds per game.

Longwood University men’s basketball will begin its season on Nov. 11, hosting Hampden-Sydney. The time has yet to be announced.

Two Longwood University men’s basketball players — one who was exonerated from a charge of assault and battery last week... read more