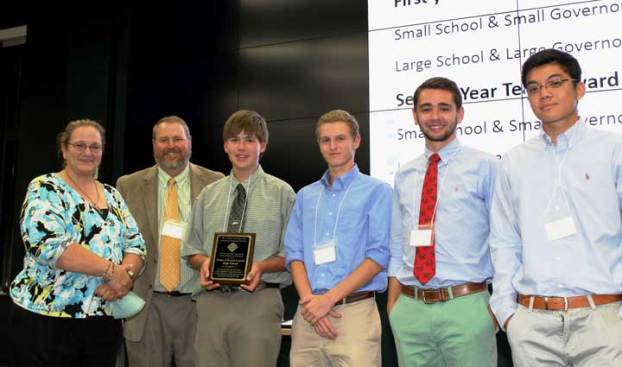 Dr. Ann Sullivan, the chairman of the Virginia section of the National Chemistry Olympiad, presented the five with a first-year team award.

“I am very proud of these students,” Lutz said. “They all performed very well on a rigorous exam.  This was the first time that Prince Edward County had a team compete in the Chemistry Olympiad, and it says a lot that these students were able to win a team award on the first-year exam.”

Each spring, the Virginia section of the American Chemical Society sponsors first-year and second-year exams as part of the National Chemistry Olympiad competition, according to a press release. This year, students from Prince Edward were honored for their outstanding individual and team performances against other students across the state. According to the American Chemical Society, many local sections honor the students, their teachers and volunteers at award banquets, luncheons

The student teams were broken down into two categories by school population, according to the release. The team from Prince Edward competed in the large school/Governor’s School category and received a first-place award out of 11 participating teams.

“Taking this test was a good way of finding out my abilities and comparing them with the rest of the state,” Diaz said. “I’m proud that I took it and plan to take the second-year test later on.”

Additionally, Lutz and Kinzer were individually recognized for their outstanding achievements. Lutz took an impressive first place on the first-year exam out of 169 students, while Kinzer placed third.

“The competition was great because we were all able to see how good we were at chemistry compared to other students in Virginia,” Kinzer said. “We already knew that we knew the state-issued standards, and it was great to go beyond that and show that we knew even more.”

The Virginia section of the American Chemical Society currently represents over 1,400 chemists from industry, academia and government.