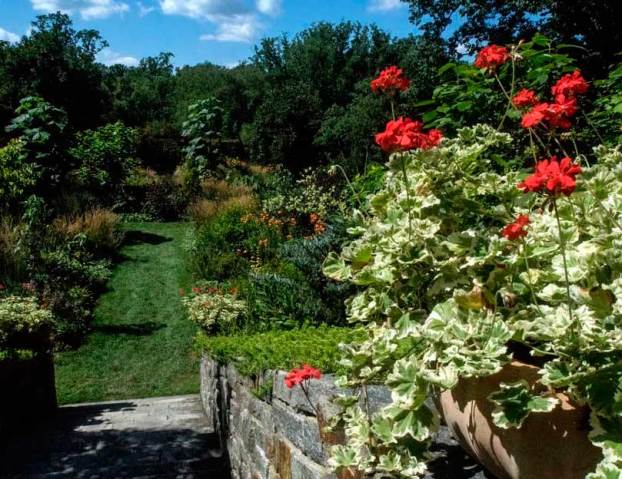 Chanticleer Garden has paths through a variety of informal plantings.

Foodies delight in dining at new restaurants, visiting much admired chefs in their kitchens, and trying whatever new, esoteric ingredient they can find. Gardeners are no different. There’s just nothing better than checking out someone else’s garden.

During the early part of the summer, I spent time at Lewis Ginter Botanical Garden. It’s where I go for inspiration and to meditate on what I might do to make my garden better. This summer’s visits, however, were special because I got to spend some time with Grace Chapman, director of horticulture. She’s been there for about five years and is bringing lots of new ideas to the garden. If you visit, you’ll find renewed interest in collections of plants. Talk to some of the volunteers and you’ll learn about how the garden is helping other institutions propagate rare pitcher plants. There’s a new wildflower meadow behind the conservatory, but there’s no fear of planting non-natives too, so you’ll find giant Amazonian water lilies, which have pads that can grow to be eight feet across. Our native Joe Pye weed is planted with abandon just about everywhere. There’s also a children’s garden with a giant tree house.

Later this summer, I headed north to Maine and visited several other gardens. One of the most enchanting was Chanticleer Garden in Wayne, Pa. Chanticleer was originally the summer retreat of the Rosengarten family. Twenty years ago, it was opened to the public and began an amazing transformation from a garden to an imaginative series of garden rooms. There’s the ruin, the remains of a family home, planted with vines and succulents. There’s a bountiful vegetable garden that seamlessly mixes edibles and flowers.

And when I finally got to Maine, I visited an entirely different sort of garden. It was stunning. Unlike Chanticleer and Lewis Ginter, this is still a private family garden open to the public one day per week in July and August by appointment. This garden was developed between 1926 and 1930 with the design assistance of Beatrix Farrand, one of America’s most renowned landscape architects. It’s very structured, even in areas that seem totally natural.

Much of the garden is in wooded areas carefully intersected with moss-bordered paths and antique Asian sculptures. The mossy areas have been sculpted into gentle, rolling hillocks and then carefully planted with various types of moss. The overall effect is beautiful, but very unnerving too.

The sunny areas of the garden are framed by several Buddhas and a large moon gate. There were also lush perennial borders very densely planted that didn’t have a single plant past its prime. Not a petal out of place — paradise.

There are some lessons learned and new ideas to mull over and test next spring. First, forget about rules. Be adventuresome and plant what makes you happy. I owe my seven Aechmea blanchetianas to an earlier conversation with one of the horticulturalists at Chanticleer Garden. Be bold, he urged. Did you know Downtown Farmville has its own collection of Aechmea blanchetianas?

Don’t be hesitant to mix natives and non-natives. At Chanticleer, there were Joe Pye weeds and cardinal flowers planted with abandon in mixed perennial borders. There were grape tomatoes trained to grow on garden fences and artichokes blooming in flowerbeds.

At both Chanticleer and the private garden in Maine, all the perennial beds were so densely planted that it wasn’t possible to see soil. The result: no need for mulch and no chance for weeds to invade. All three gardens include areas that encourage visitors to linger for a moment. We can all add spaces like that to our home gardens.

If you don’t get an opportunity to visit Lewis Ginter or some other garden any time soon, at least go by the train station and check out the Aechmea blanchetianas. They’re wild and spectacular and will make you smile.