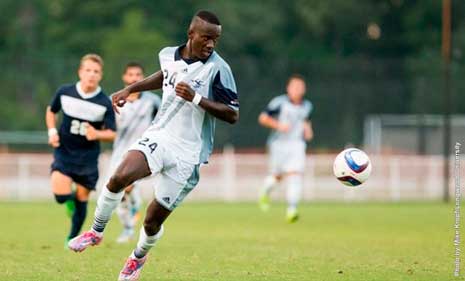 Redshirt freshman Willy Miezan scored three goals in his official Longwood debut to lead the Lancers to a 4-1 rout over visiting VMI in the 2015 season opener Friday night at the Longwood Athletics Complex.

The Lancers defeated the Keydets in the opening game for the second straight season. A 6-0, 170-pound forward from Alexandria, Miezan came off the bench to deliver his hat trick, scoring his first career goal in the opening half and delivering two more in the second half. Miezan opened the scoring in the 38th minute of the game off a set piece after Finnlay Wyatt sent a corner into the box and the redshirt-freshman was there to punch the ball past VMI goalkeeper Alex Guerra and give Longwood a 1-0 lead.

Zach Crandall scored the game-winner 11 minutes into the second half, to put the Lancers up 2-0.

After VMI cut the Longwood lead to 2-1 midway through the second half off a goal from Todd Johnson, Miezan struck two more times back-to-back goals just over one minute apart. The first came off a cross from Zach Corcoran, while the second came off a creative play assisted from Michael Margulis.

Longwood opens the season next week with a trip to UNC Greensboro for 7 p.m. game against the Spartans.