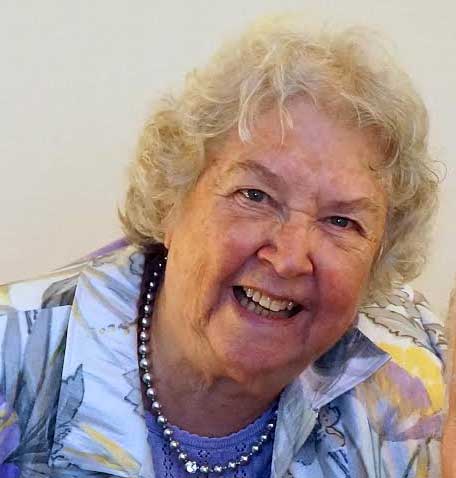 Over the course of her slightly more than 85 years on this earth, Jean McLachlan Hayden lived a loving, caring, faithful and interesting life. This life came to an unexpected and regrettably unplanned end on the morning Saturday, September 5, 2015 at Southside Community Hospital in Farmville. The last living of three sisters, Jean was born and grew up in Noranda, PQ, Canada, her father a mining engineer and her mother a nurse.

Ever the free spirit, Jean met her husband, soul mate and partner of 65 years (married for 61), the Reverend Doctor Robert S. Hayden (Bob), while in college at Bishops University, in Lenoxville, PQ, Canada. Jean also cared deeply about and for her children, Carol Hayden Oliver and Andrew Hayden, to the end.

For their first two decades together, Jean moved with Bob from church to church, basking in the light as an Episcopal Ministers wife and gaining a lifelong taste for Gin Martini’s (stirred not shaken). The church life took them from a small town in Maine, through Kansas City, MO and Nashville, TN, however, everything changed shortly after arriving in Charlotte, NC. As the direction of the country changed, so to did the future of the Hayden family, culminating in 1973 with Bob’s decision to leave the parish ministry. When that happened, Jean went to work as a nurse – she had received her RN from St. Luke’s Hospital School of Nursing in 1955 – to support the family while buying Bob two sport shirts and sending him back to school for his PhD in Earth science. Nurse Jean was now the family breadwinner. In many ways, her decision to return to nursing was both liberating and fulfilling. It was a career she enthusiastically continued to pursue, including stints as a floor nurse, a slightly maladjusted mental health nurse and a Red Cross Vampire (ok, she worked Blood Mobiles), until she retired 15 years later.

The year 1987 saw one final move for Jean and Bob when he became a professor at Longwood University in Farmville a town that she would call home for the rest of her life. Jean embraced life in Farmville with enthusiasm. She volunteered at the hospital, read at church and became a member of the Farmville Women’s Club – rising to be president for several years – among her many pursuits. Right up to the very end you could find Jean enjoying her classical music, checking in with friends on email and yelling at “stupid” posts on Facebook.

In the end Jean was more concerned about everyone around her than herself. After the fact, it is obvious that she was much more sick than she let anyone know, because she did not want them “to worry” about her. Knowing what we know now, her sudden and unexpected passing came blessedly quickly and without the pain she may have otherwise endured. For that we are grateful, though we would give anything to have even five more minutes with her — we’ve got some questions…

Jean would be mortified by her passing in such an untimely and disorganized manner. While she and Bob had carefully prepared for his passing, hers was never really a consideration. Thus the timing of her death on a holiday weekend, the lack of details for a funeral and a stack of unpaid bills were things she would never have wanted to leave behind…but that’s what happened. And Jean had her own filing system that consisted of piles of various papers, bills, letters and notes scattered about the house. The copies of the signed wills that she swore were “In the file cabinet in the bedroom” were in a folder labeled “Oakville Golf Club” stacked amidst envelopes of old family photos. Jean could be very scattered, but in her world everything was organized. As a result, with Jeans passing, her family had a week long scavenger hunt to track down all of the important papers, bills, bank and financial statements and legal documents. Hence, the questions.

It is nearly impossible to sum up the life and the person that was Jean McLachlan Hayden. There simply are not enough of the right kind of adjectives. She was loving, caring, thoughtful, dedicated, brave, inspiring, independent, hopeful, graceful, warm, funny, kind, brilliant, stern when she needed to be, faithful, concerned, and spirited. She always cooked the families holiday meals, supported the less fortunate and found the good in people.

In addition to her husband, son and daughter, Jean is survived by her three grandchildren, Gene III, Calieigh and Emily, courtesy of Carol and her husband, Gene Oliver. She also leaves behind a loving daughter–in–law, the artist Lisa Stewart who gave Jean the only nickname that ever stuck: “Madam,” a name she gleefully adopted and embraced for the rest of her life.

There will be a memorial service for Jean at Johns Memorial Episcopal Church in Farmville at 2 p.m. on Saturday, September 26. The family requests that people attending not wear black as we are celebrating the life that was Jean McLachlan Hayden and not the future we face without her.

Please consider making a donation in Jean’s memory to the St. Luke’s Hospital School of Nursing Alumnae Association Center for Public Education at the Foundation of NYS Nurses, Inc., 2113 Western Avenue, Albany, NY 12084. You can also call with donations: 518–456–7858. Finally, donations can also be made online at www.fnysn.org. When making donations online please indicate the donation is in memory of Jean McLachlan Hayden to the Center for Public Education.

On Tuesday, September 15, 2015, Deacon Cecil T. Watson answered the call from labor to reward at the MCV Hospital... read more