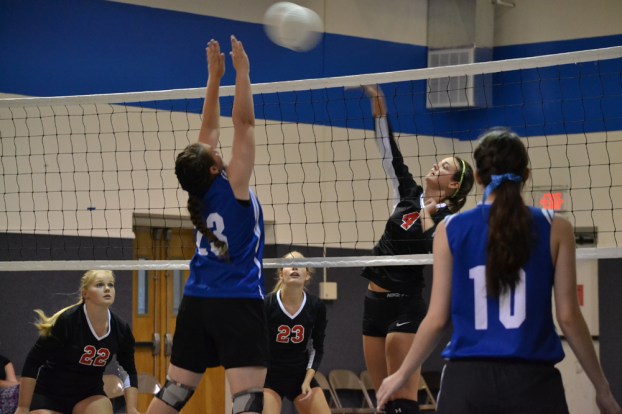 Fuqua School’s varsity volleyball team kicked off its season with a win in its first match, when the Lady Falcons defeating New Life 3-0.

The Lady Falcons began their night with a tight set, where the Lions were nipping at their heels. Although it was a close match, Fuqua edged New Life 27-25. The Falcons then stepped up their game in the second set and quickly took a 25-11 win over the Lions.

Their last set proved to be a harder task. The Lions and Falcons battled back and forth and were resilient in their efforts. However, Fuqua cranked up their offensive game to take a 25-20 set win.

“I thought we didn’t play to the level we had been practicing at tonight, but that’s to be expected in the first match of the season … in addition to playing a scrappy New Life team that digs a lot of balls and gets teams out of their rhythm,” said Fuqua School varsity volleyball coach Matthew Houchins.

“Right now I think we have a lot of depth in a number of positions, so we’re still trying out different lineups to see who plays best where and in what formations.”

Taylor Frink led the Falcons with 26 assists, while Tessa Ayers had 13 kills.

“Once we solidify a lineup, I think we’ll hopefully decrease the amount of errors that we had tonight that comes with players being in new positions at the beginning of the season,” Houchins said.

“There is a lot of competition in practice now with players battling for starting sports which is making everyone work hard and improve.

The Fuqua varsity volleyball team will return to the court next Thursday when they host Roanoke Catholic at 6 p.m.

The New Life Lady Lions team will return to action on Friday, when they host Grove at 5:30 p.m.